The Bartlett Real Estate Institute (BREI) official launch event took place on 31 October with guests from across the Built Environment.

The evening marked the unveiling of the Bartlett Real Estate Institute’s new space, part of UCL’s campus at Here East in the Queen Elizabeth Olympic Park. Hosted by BREI Director Andrew Edkins, the event set out the ambitions of the Institute as a centre devoted to rethinking the traditional views of real estate.Yolande Barnes, who joined BREI as Chair in September 2018, delivered the keynote lecture in which she discussed the challenges facing real estate in the 21st century, and the ways in which its value is shifting. She discussed society, technology and money as areas of huge change impacting the area of real estate:

"It is this tsunami of change that we are responding to here at the Bartlett Real Estate Institute. Our response is special because it reaches across many different areas, both in real estate but also in the areas of academia and the industry." 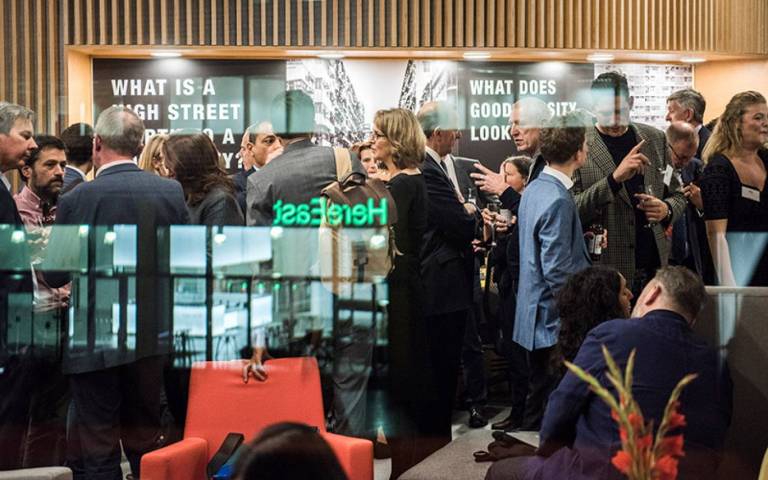 While real estate currently accounts for around 60% of the world’s tangible wealth, research in BREI will look at real estate beyond its value as a commodity in a tradeable market. It aims to understand more deeply, appreciate more widely and measure more accurately the many forms of value that real estate creates.

In 2017, The Bartlett expanded from its historic home in Bloomsbury to a new campus at Here East in the Queen Elizabeth Olympic Park.

Designed by architects Hawkins\Brown, a key driver of the design of UCL’s 6,200 sqm space at Here East was to create visibility across the entire facility, encouraging collaboration and innovation between various departments. For the first time in UCL’s 200-year history, The Bartlett and UCL’s Engineering Sciences Faculty are sharing a space and running collaborative teaching programmes.

This film by ScanLAB Projects shows the transformation of UCL’s 6,000 sqm space at Here East, which features a 330-seat multi-functional auditorium and a 2,000 sqm robotics and advanced prototyping space developed with UCL Robotics Institute.