A recent guest lecture by Professor Pintus explored the links between infrastructure investment and income inequality. 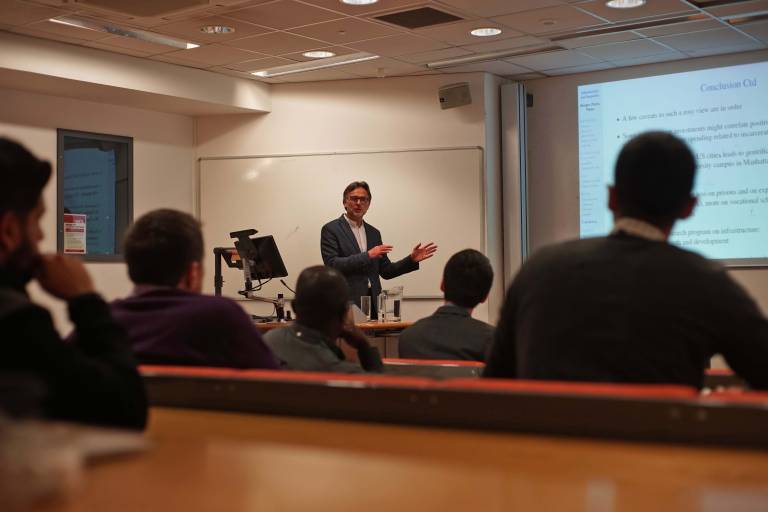 This week, Professor Patrick A. Pintus, Research Economist at the Bank of France, joined The Bartlett School of Construction and Project Management to deliver a guest lecture on the impact of infrastructure investment on income inequality. The event was organised by Dr Xuxin Mao, Lecturer in Construction Economics, and was attended by staff and research students from the School.

Professor Pintus reported findings from his research, co-authored by Emma Hooper and Sanjay Peters, which examines US state-level data on infrastructure spending and per capita income inequality from 1950 to 2010. The findings indicated that that investment in certain types of infrastructure, specifically highways and higher education, reduces income inequality.

Audience discussion following the lecture highlighted the phenomenon of greater economic activity being drawn towards areas with improved transport links. Professor Pintus noted that increased investment has in some cases led to gentrification and the migration of poorer citizens away from these areas, thus leading to greater inequality.

The implications of political developments for infrastructure investment were also discussed. In response to Prof Pintus’s lecture, CPM’s Director of School Dr D’Maris Coffman noted recent state-level legislation aimed at minimising budget deficits and how this might result in reduced public infrastructure investment over time. How this might affect inequality in turn was suggested as an avenue for further research.

Building on his findings, the research team will now continue to examine data with a greater degree of granularity. The School will follow this with great interest.

Find out about our degree programmes