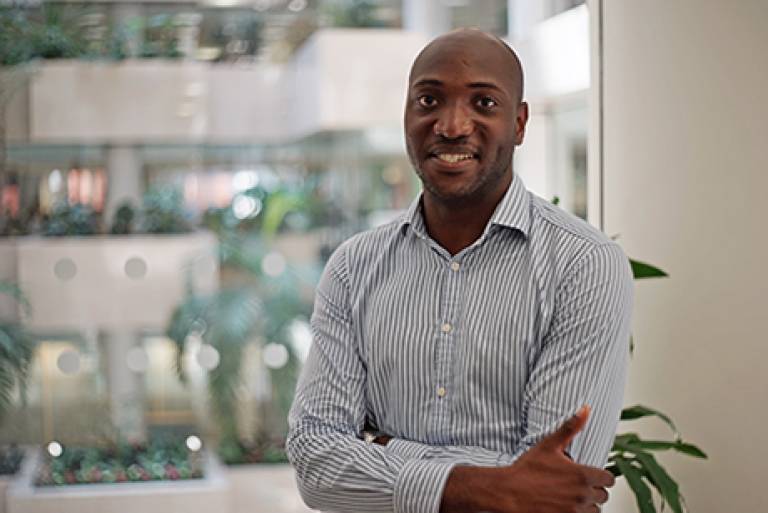 Winston Alaneme, alumnus of the BSc Project Management for Construction programme, is currently a project director with the Education Funding Agency, part of the Department for Education on the free schools programme. He is the lead Official responsible for the capital delivery of nine free schools, including a variety of primary, secondary, and SEN schools. We caught up with him at the Department for Education:

What does your current role involve?

As project director I manage nine project managers who are responsible for managing nine different sets of ‘technical advisors’(an EFA term for the professional responsible for project management and contract administration of a construction project). Free schools are new academies, so they have wide-ranging freedoms in terms of curriculum, what they pay their staff, term dates, etc. Albeit, the Department for Education reviews and scrutinises that. After the DfE and Regional Schools Commissioner approves a free school for opening, it passes over to the capital side of EFA. We are responsible for negotiating acquisition or leases of sites and then establishing a project strategy to deliver the construction works; on the education side, the DfE is involved in reviewing curriculum and education plans, running consultations, liaison with OFSTED, etc. A large part of the role is reporting to and obtaining approvals from Ministers; so effectively I’m the conduit between the project team at the delivery end and public accountability.

With the administration of new free schools, it seems very centralised in the sense that there is no Local Government Authority between the school and central government. Would you say that it is a challenge for central government to administer those schools?

Yes, I would say it is a challenge but the department has put measures in place and is constantly learning and reviewing procedures. For example, the Department for Education has brought in eight Regional Schools Commissioners, one for each English region. They decide which free school applications to approve, which existing academies to expand - because all of them want to expand – and which should benefit from capital investment. They can look at educational provision on a regional basis, cascading best practice beyond the traditional boundaries of a local government education authority. Each Commissioner has an educational background and chair what are called Head Teachers’ Boards, which include notable local leaders in education, such as heads of Outstanding free schools. Whereas these decisions used to be dealt with in the Department, they now go to these boards. In addition, there is a National Schools Commissioner, Sir David Carter. So, this new infrastructure of oversight of academies and free schools which, interestingly, runs parallel to existing Ofsted regimes but is run by local experts in their fields who all successful careers as educators. Although, whilst the Regional Schools Commissioner body is very much part of and directly advises the Department, Ofsted is an independent regulatory body.

Turning to C&PM, how has BSc Project Management for Construction prepared you for your current role?

It has been instrumental. I wouldn’t be here without the course. One of the main things I picked up from the course was, when taking on board a new project, the value of meeting the client and asking them to articulate their needs in their own language. It’s the job of the Project Manager to process and challenge this and translate it into construction terms. I think as an industry we can get fixated on discrete professions and specialisms, sometimes to the detriment of what the client actually needs and wants. The multidisciplinary nature of the degree at UCL really assisted with breaking out of that quite restrictive mentality. All of this really helped on a day-to-day basis and gave me the confidence to challenge and question aspects of the decision making process at all levels. Building a new school isn’t about construction, it’s about improving educational outcomes.

What was it that drove your interest in selecting BSc Project Management for Construction?

I was always interested in the built environment, and how it can influence human behaviour, so my initial choice was to study architecture. However, at the point of applying in 2004, I became interested in debates about why so many of our construction projects do not meet initial expectations around cost and time London had just been awarded the Olympic games and gearing up for their successful delivery was a very live topic in the industry. Thus, I shifted my focus to project management. I was particularly interested in the process and human factors around how you establish realistic expectations, move through a gateway approval process, and realise that aspiration in the form of a built asset. Of course, sometimes the best solution for the client is not a building but, instead, rationalising how you use a space within the building which might invariably turn into a refurbishment project. Or, it’s about changing how you do things - which is an organisational management issue - or seeing the problem in a new way. These debates are, perhaps, less a construction specific issue and more of a management consultancy problem. Project management has a much broader focus.

What issues have arisen in your current role?

What I’ve always found interesting is why, in construction, we often ask contractors to gamble on the unknown. We seek to pass the risk on but sometimes it’s an illusion which results in not obtaining the best outcomes. It’s something that seems quite unique to construction but I can also see why. When initial expectations aren’t set or risks properly explained, the client loses trust and can become disillusioned. This then affects the approach to future projects. In this particular environment of market buoyancy, contractors are choosing work so it’s almost inevitable there will be difficulties.

One of the main things I have learnt is we live in an imperfect world. Progress is often followed by disappointment and you can only get so much done, but that doesn’t mean you stop trying or stop being optimistic. It’s about using your limited political capital wisely and not getting downhearted when there’s a setback.

Winston Alaneme’s views are his own and not representative of the DfE or any other organisation referred to in this article.