Building partnerships through the power of projects: IRNOP 2015 conference review

On June 21-24 The Bartlett School of Construction and Project Management hosted the 12th IRNOP (International Research Network on Organising by Projects) conference. 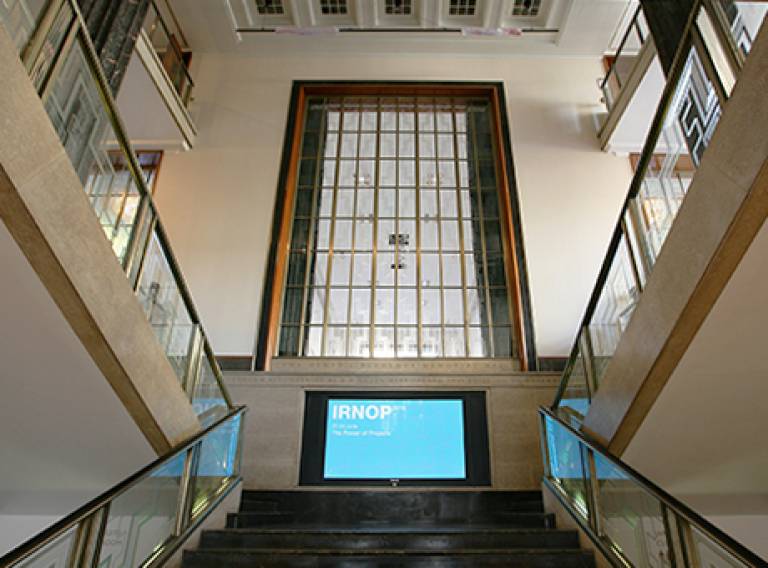 Led by two of our very own academic colossi, Andy Davies and Hedley Smyth, the conference’s theme was The Power of Projects.

In his welcome Andy Davies pointed out that the theme of past IRNOP conferences have often reflected, in part, the interests of the host institution. This year was no different. The Power of Projects theme was specifically chosen to emphasise the role of projects in the far-reaching transformation of London’s built environment, such as; the development of an entirely new urban area in the Olympic Park, Crossrail (Europe’s largest megaproject) and The Shard (Europe’s tallest building). The magnitude and gravitas of the theme was pleasantly contrasted by the informal and intimate atmosphere of UCL’s Bloomsbury campus, which proved a fruitful stimulus to networking and debate.

The conference included plenary sessions and several parallel tracks with a total of 80 keynote and paper presentations. It was attended by over 130participants from more than 15 countries, and by some of the most renowned scholars in the field of project management research, as well as industry professionals with interests in projects, temporary organisations, project organising, and project-based organisations. The conference was sponsored by Association for Project Management, Project Management Institute, and International Project Management Association. In addition to the official programme, there was an excellent doctoral workshop and variety of social events - including a visit to the Olympic Park - which provided delegates with the opportunity to experience first-hand the offerings of the capital.

The opening lecture of the conference was given by Aaron Shenhar, one of the world’s leading scholars in project management and technology management, on ‘The Integration of Innovation and Project Management’. This was then followed by a series of five tracks: ‘Project-Based Organisations’, ‘Innovation’, ‘Strategic Management of Portfolios, Programmes and Projects’, ‘Megaprojects’, ‘Knowledge Routines and Learning’. The day’s presentations were rounded off with a keynote lecture from Andy Mitchell CBE, CEO of Thames Tideway Tunnel, on ‘Innovation in Megaprojects’.

For Monday’s social event, the delegates were warmly welcomed by a dinner in the resplendent Florence Hall of the Royal Institute of British Architects. A pre-prandial welcome toast was given by the Dean of the Bartlett, Professor Alan Penn, while the Ronnie Scott’s All Stars jazz band struck up the perfect musical accompaniment to the dinner.

With some heavy heads, Tuesday’s lecture series began with tracks on ‘Leadership, Governance, and Decision-Making’, ‘Networks’, and ‘People and Professionalism’. The afternoon saw presentations given on ‘Collaboration’, ‘Processes and Performance’, and ‘Value’. Tuesday’s keynote was particularly popular with a joint presentation between Peter Head, Chair of the Institute for Sustainability and a champion of sustainable development, and Peter Morris, Professor of Construction and Project Management and Deputy Chairman at IPMA. They presented a panel discussion on ‘Climate Change and the Management of Projects in the 21st Century’.

Tuesday evening provided delegates with a different insight into the capital’s built environment with a boat cruise down the River Thames, taking in the sweeping views of structures old and new, as well as the looming tower cranes and their promise of future projects.

Wednesday continued with tracks on ‘Trends’, ‘Tools, Tasks, and Conduct’, and ‘Processes and Performance’. This was then followed by a ‘Meet the Editors’ session with IJPM, PMJ and IJMPiB, and presentation of paper prizes.

The conference hosts followed on with the prize for best paper to Jennifer Whyte and Sunila Lobo for their paper, ‘How firms build project capabilities to deliver complex projects’. The award for best student paper went to Anna Maija Hietajarvi’s paper (supervised by Kirsi Aaltonen), ‘Reaching harmony over who we are and how we cooperate’.

Overall it was a resounding success both for the School and UCL, as well as for IRNOP. Andy Davies rightly drew special attention to the key part played by Donna Gage in the organisation and smooth running of the conference. We extend our thanks to her once again for her relentless hard work, as well as to Andy Davies and Hedley Smyth for their leading roles. Finally we would like to wish the next hosts, Boston, all the very best for 2017.

Join the IRNOP network on LinkedIn