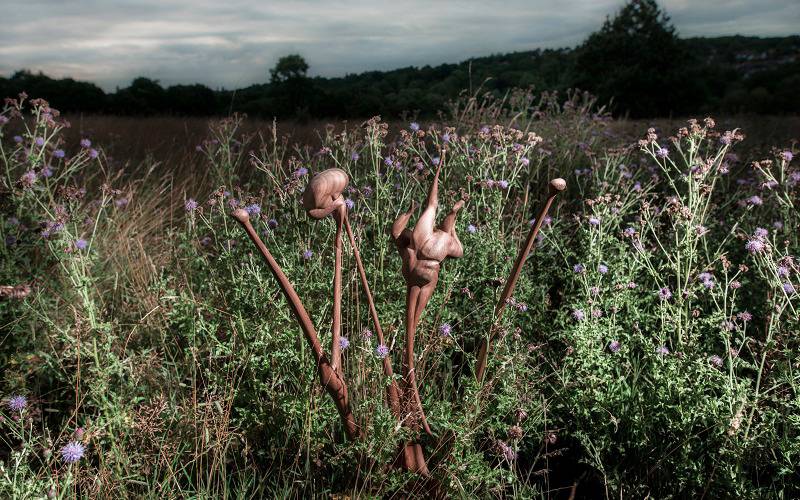 The Struggle for Existence

This research sets off from Hortus Eystettensis, a celebrated codex of botanical drawings by Basilius Besler illustrating a lost sixteenth-century garden in Eichstätt, Germany. Illustrated using symbolic taxonomy, the drawings offer testimony to the garden’s existence. They aid in the identification of the garden’s species and, remarkably, enable a reconstruction of the garden – now known as the Bastion Garden – through the knowledge extracted from them. The illustrations, however, present very limited scientific value when likened to today’s most distinguished biological drawings.

Scientific representations such as Ernst Haeckel’s plates in Art Forms in Nature (1899) or Rudolf and Leopold Blaschka’s glass models (1863 –1880) communicate factual information to their targeted audience. However, in the nature of didactic illustrations and fixed representations, the data is often limited to identification and morphology and is less revealing of lifespan, ecological relationships, and struggles. In natural history, most distinctly in Charles Darwin’s On the Origin of Species (1859), we get a sense of a few of these concealed struggles for life, and in their masked quality they constitute the essence of this work. Thus, approaching nature through botanical illustration, the research attempts to tease out the concealed, often omitted elements that lead to an output.

Formalised through a series of made objects, designed to accentuate their inner workings and interactions, the work is concentrated on the design of a garden. Echoing the speculative character of the Bastion Garden in Eichstätt, the work exists through one’s reading of the made objects, providing multiple interpretations and no absolute end. These outputs connect, copulate, and transpose within a domestic garden and through characters that rely on nature and mankind to survive. In employing socio-botanical constructs that unceasingly displace the garden on the wild-domesticated spectrum, the research probes the ontology of nature in the hope for this metaphor to germinate and bloom.

William Victor Camilleri is an architect, artist, maker, and Teaching Fellow at The Bartlett School of Architecture. He received his Bachelor’s degree in Architecture and Civil Engineering from the University of Malta, practiced in Switzerland, and subsequently attained a Master’s in Architectural Design from The Bartlett, where he is currently pursuing a doctoral degree.

William Victor’s research and expertise in and around digital manufacturing and film has been featured in media and exhibited in venues such as Ars Electronica (Austria) and the Vitra Design Museum (Germany).