This UK government-funded project aimed to investigate the relationship between physical segregation and economic marginalisation in the city, focusing on 19th century and later on contemporary London 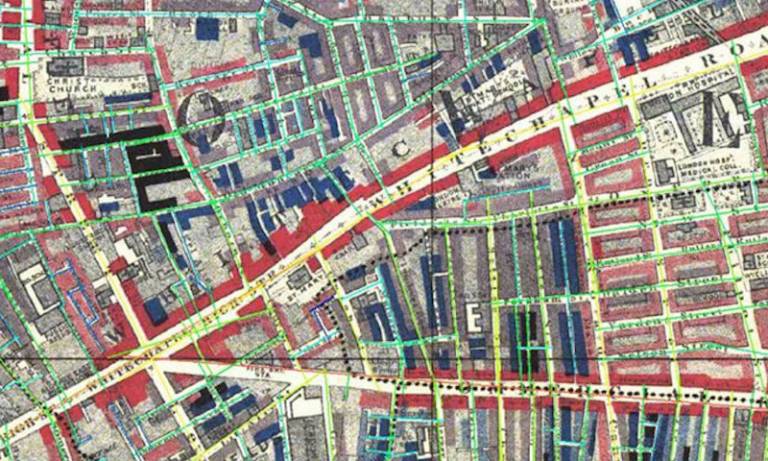 The aim of the project was to analyse how the design of cities has an impact on the location of poverty areas and to research how changes in design over time lead to concentrations of poverty and immigration in particular urban areas.

The research used space syntax methods, which are used to create objective representations of urban form and a geographical information system (GIS) to layer the space syntax spatial model of the street system along with a variety of sources of spatial data, including Charles Booths maps of poverty in 19th century London and census data.

Focussing on two areas in the east end and west end of London known for their high levels of poverty, the analysis found that the spatial location of poverty classes was strongly related to their physical accessibility: the poorest classes were in the most inaccessible parts of the area.

Analysis of change over a ten year period indicated that there was a circular influence between social and spatial change: slum clearances had the effect of improving the economic situation of inhabitants of the immediate area, but this masked the fact that the poorest people had moved to cheaper accommodation deeper within the district and had then been replaced by others.

The areas surrounding the slum clearances had a marked drop in economic situation: an apparent ripple effect resulting from spatial change - and an indication that the improvement of spatial organisation may not have had a profound impact on the poorest classes. A study of immigrant settlement patterns indicated that there was a positive relationship between length of time in the country, economic situation, and physical accessibility of place of residence.

The aim of the study was to inform the design of contemporary urban areas to ameliorate the negative effects of living in poverty areas.

The research was novel in the manner in which it applies "space syntax" methods to analyse the fine detail of the built environment and the way in which it studies spatial form as a separate variant in the investigation of the spatial patterning of poverty.

Existing space syntax methods for modelling street networks as complex geometric and topological systems were advanced during this study, which enabled researchers to develop new, more precise techniques for measuring the finest changes in urban form. The historical research was subsequently replicated with the cooperation of two London boroughs who wished to investigate persistent deprivation in their neighbourhoods. This led to the development of a new method of quantifying deprivation in relation to precise spatial statistics, replicating Charles Booth's methodology using contemporary data. It was published in Radical Statistics in 2009.

The Museum of London used the research outcomes to inform their exhibition on Jack the Ripper, for which a website was created to educate the public on the use of historic maps to understand London’s past. The site was funded by Museum of London and EPSRC.

The research is cited in scientific articles such as Mathematical Analysis of Urban Spatial Networks as well several articles in New Scientist, including Equation can spot a failing neighbourhood.

This work has also fed into three television productions on 19th century social maps and the Charles Booth maps of poverty. A clip from the BBC4 Maps: Power, Plunder and Possession series can be seen here (the work featured in the episode 'Spirit of the Age' on 25 Apr 2010).

Future plans are to work with the LSE and Cambridge University on the 1930s 'New Survey of London', which aimed to update Charles Booth's survey.

Space and exclusion: the relationship between physical segregation and economic marginalisation in the urban environment