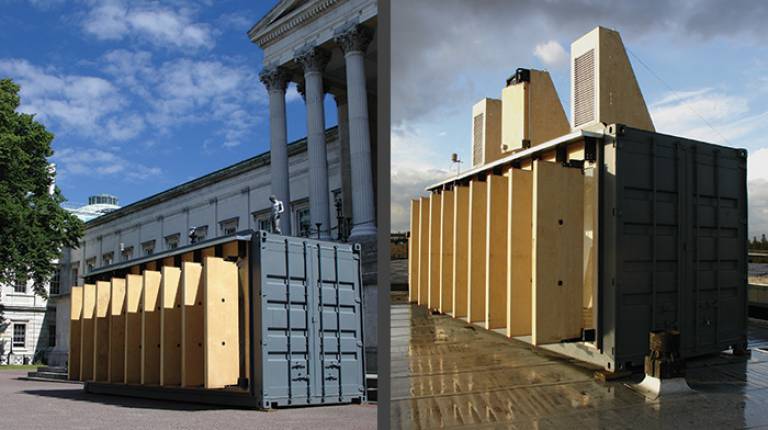 Stephen Gage, Professor of Innovative Technology, joined the Bartlett School of Architecture at UCL Bartlett Faculty of the Built Environment in 1990 and was Director of Technology from 1990 to 2009. He established the Bartlett Interactive Architecture Workshop (BIAW) in 1995. The BIAW focuses on interactive technologies as subjects of investigation in their own right as well as their use for creating innovative architecture. Taking its cues from systems theory, cybernetics, behavioural analysis and performative design, the research has elucidated a continuous design feedback between digital and physical iterations. Members of BIAW have included: Usman Haque (Haque Design + Research); Jason Bruges, Dave DiDuca, Richard Roberts (Jason Bruges Studios); Phil Ayres (CITA: Centre for Information Technology and Architecture, Royal Academy of Fine Arts, Copenhagen); Will McLean, Pete Silver (University of Westminster); Matthew Potter (Wilkinson Eyre); Paul Bavister (Flanagan Lawrence); James O'Leary and Ruairi Glynn (Bartlett School of Architecture, UCL).

There are two major research strands in Stephen's collaborative work in the BIAW.

Responsive behaviour, interactivity and performance: Research that is predicated on the notion of architecture as time-based, changing its form and behaviour, rather than being static and fixed. As such, the people and objects in the built environment can be regarded as performers, especially where the behaviour of those objects is also subject to change over time. Against this backdrop, BIAW research has explored and demonstrated the importance of analysing responsive behaviour, particularly in order to understand the differences between simulated virtual systems and the lived behaviour of occupants whose engagement with their environment is largely haptic. This is treated as vital to conceptualising the immediate, localised responses of dynamic architectural elements or systems to their external environment or patterns of internal occupation.

Stephen has published these theoretical ideas in articles on human observers' appreciation of responsive and interactive installations in: 'Edge Monkeys' (2005) and 'The Wonder of Trivial Machines' (2006). The theme of performance was developed further in a paper, 'Constructing the User' (2009), which explored notions of the temporary and permanent in interactive design. The research also considers the ways in which constructed environments can 'observe' and respond to users' needs, in turn catalysing performativity contingent on those observed needs and responses.

Innovative design practice: Understanding differences between simulated and actual behaviour is especially relevant in design, where the observer's engagement is haptic and the virtual observer's descriptions are inevitably partial and incomplete. Work on interactive technologies and innovative design practice is founded particularly on £200,000 DTI Partners in Technology funded research led by Stephen between 1998 and 2001, titled 'Enhanced Stack Ventilation and Cooling for Urban Sites' which examined the innovative use of micro-controllers and internal environmental monitoring in the design and control of 'top down' ventilation in urban areas. Stephen's second approach during this period investigated the transitory and experiential possibilities of interactive architecture. Conducted in collaboration with Pete Silver, this strand of the research extended Silver's earlier work with John Fraser and Gordon Pask (Architectural Association) on cybernetic and performative interests; the resulting 'aesthetically potent environments' (Pask) showed how occupants' delight informs our experience of buildings.

In combination, these ideas have underpinned the exploration of the capacity for accessible, low-cost digital equipment for sensing, computation and actuation to produce beneficial short circuits in the design process. The research has demonstrated that working directly with new responsive technologies allows architects and designers not only to create projects with time-based features, but also to produce innovative software with significant marketing potential. Stephen's most recent research focuses on the relationship between active façades and interior occupancy, and the possibilities for delivering innovative, interactive, indeterminate architecture in the context of environmental sustainability.

The two strands came together in papers presented at the Digital Creativity conference (2000) and in 'The Wonder of Trivial Machines' (2006) which examine human delight in, and recognition of, physical and logical patterns in designed environments.

Stephen A. Gage, G.R. Hunt, and P.F. Linden, 'Top Down Ventilation and Cooling', Journal of Architectural and Planning Research 18.4 (2001): pp. 286-300.
[Note: this publication was developed out of research which investigated how to naturally top ventilate urban buildings to avoid low level air intake from polluted streets and car parks.]

Stephen A. Gage and Will Thorne, 'Edge Monkeys: The Design of Habitat Specific Robots in Building', Technoetic Arts: A Journal of Speculative Research 3.3 (2005): pp. 169-180.

Researchers from the BIAW have gone on to develop original and award-winning artistic and cultural designs, as well as architectural design studios that contribute to the British architecture and design sectors.

The formation of innovative design studios producing original artistic and cultural artefacts: Interactive, responsive and performative architectural design is evident in specialist responsive architectural elements such as interactive façades, modulated lighting and motion-sensing components, and in the provision of immersive and large-scale landscape installations for public and private clients.

Impacts on culture, wellbeing and the economy:

Haque Design + Research: Pachube (2009-2011), an open-source, real-time environmental data infrastructure and online community designed allows individuals to store, share and discover real-time sensor, energy and environment data from objects, devices and buildings around the world through the internet of things – a global online network of tools and gadgets. In 2011 the software (rebranded as Xively) was sold as a $15m spin-off company to LogMeIn to support its cloud services; by July 2013, more than seven million devices have been connected using Pachube technology.