Arts & the Brain: Spectacles of the Mind

'Arts & the Brain' (2007) examined space, music, poetry and dance in relation to memory, perception and emotion (as part of Arts Challenge Initiative at the University of Michigan). 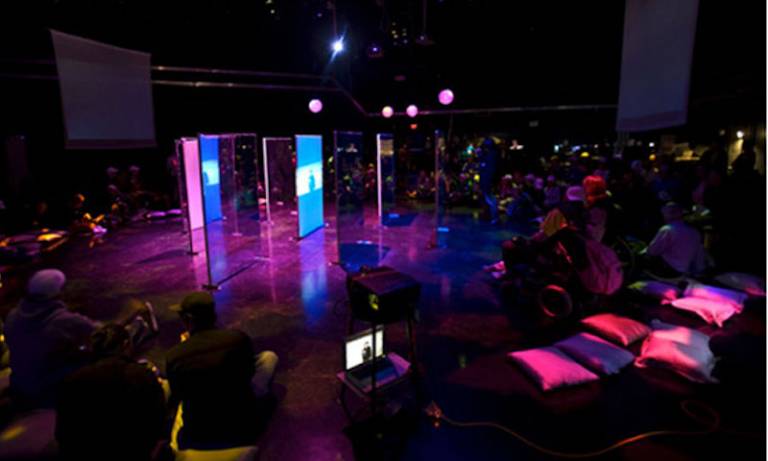 Led by Dr Sophia Psarra, it brought together an interdisciplinary team of academics and artists from the University of Michigan, University of California Davis, and Simon Fraser University, Vancouver (USA), and from the fields of neuroscience, music, English and performance art. The activities of the team focused on multi-disciplinary collaboration culminating in an interdisciplinary studio with 100 participants consisting of members of the public, academics and students.

Starting with the old philosophical connection between the mirror and the mind, and the idea that mental processes are supported by neural network activity in the brain, Dr Sophia Psarra and Satoru Takahashi built installation consisting of mirror surfaces incorporating, image, sound and movement.

The purpose was to create an environment where spatial navigation was combined with visual and audio stimuli. Those were multiplied through the mirrors and projected images, expressing metaphorically the idea of neural networks in the brain. Visitors were an integral part of this environment, interrupting and carrying the projections with their movement.

The project also took inspiration from the difference between an immersive experience and a panoramic one. In the former, spatial navigation is related to the particular perspective of the observer. In the latter navigation relates to a framework, which is independent of the viewer’s spatial position.

The intention was to translate 'egocentric' and 'allocentric' frames of reference describing navigation, from psychology and neuroscience to space. Video projections and top-down views through a camera positioned on the ceiling encapsulated this dialogue. The projections extended the idea of immersive versus panoramic vision further by alternating from single-view-point perspectives of streets to aerials, maps and satellite images of different cities and places.

Many of the ideas in this installation were informed by research on the interaction between the conceptual and perceptual dimensions of architecture (Psarra, S. (2009) Architecture and Narrative: The Formation of Space and Cultural Meaning, London, New York: Routledge). http://www.routledge.com/books/details/9780415343763/

The purpose of this project was to communicate complex scientific ideas to the public and engage them in playful forms of learning through active participation. Approaching this subject from both academic-analytical and creative directions interlaced scholarly research with design application, seeing these forms of engagement as complementary rather than mutually exclusive.

This project was reviewed in:

'Reflection Through Space and the Mind', Katterman, L., (ed.) (2008), in Search and Discovery, Research at Michigan, Ann Arbor: Office for the Vice President for Research, The University of Michigan, Spring 2008, pp. 4-6.

Search and Discovery was distributed to all faculty members in the University of Michigan and members of the public interested in research taking place in the university.