David Roberts is a Teaching Fellow in Architectural Design and Architectural History & Theory Tutor. David is also a Research Ethics Fellow at the Bartlett Faculty of Built Environment. 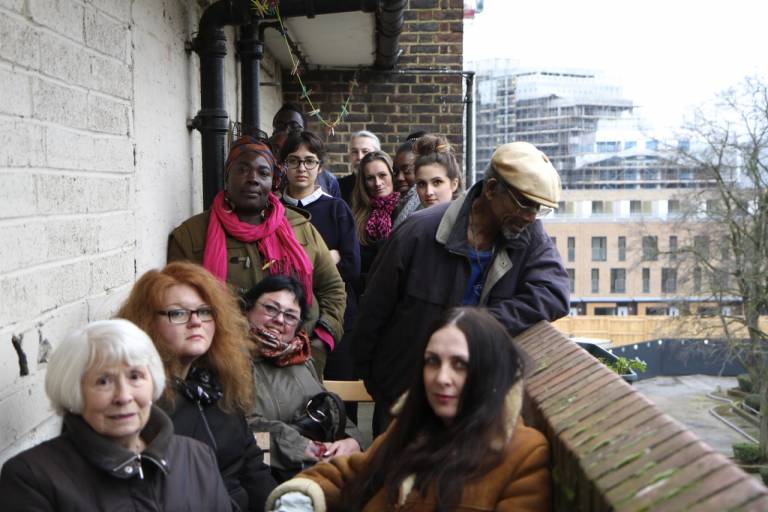 David Roberts is a Teaching Fellow in Architectural Design and Architectural History & Theory Tutor. David is also a Research Ethics Fellow at the Bartlett Faculty of Built Environment. Alongside his work at UCL, he is part of collaborative art practice Fugitive Images and of architecture collective Involve.

David uses poetry and photography to explore the relation between people and place. He has exhibited, lectured and published work related to public housing, architecture, critical methodologies and site-specific practice.

David's research, art and cultural activist practice engages community groups whose homes and livelihoods are under threat from urban policy, and extends architectural education to primary and secondary school children. Through this collaborative practice he co-wrote and co-produced the feature-length documentary/fiction film, Estate, a Reverie. He co-curated a six-week project Real Estates, opening PEER up as a social, discursive and imaginative space around issues of housing and spatial justice in East London through a constantly changing series of exhibitions, screenings, discussions, readings and workshops. He developed an interactive website Balfron Tower: a building archive and co-coordinated a successful campaign to list Balfron Tower at Grade II*. Slab, a collection of concrete poems about life and loss in language and stone, will be published by Copy Press.

David is driven by an aspiration to defend welfare state architecture and salvage the principles at its foundation.

The history of housing the working population in Britain has a predictable circularity in architectural form; one generation’s panacea becomes the next generation’s problem, only to be reappraised with remorse after it has passed.

My thesis is a practical and theoretical research project into this cycle. It explores the history and future of two east London housing estates undergoing regeneration; the Haggerston Estate, a 1930s London County Council neo-Georgian perimeter block demolished in 2014; and Balfron Tower, a 1960s Brutalist high-rise designed by Ernö Goldfinger facing refurbishment and privatisation in 2016.

To ‘make public’ expresses a demand and an aspiration; materially – to protect and extend public housing provision at a time when austerity measures are dismantling it in ideal and form [Phillips and Erdemci, 2012]; procedurally – to make visible problematic processes of urban change that are increasingly hidden from public view under the pervasive metaphor of regeneration [Campkin, 2013], and; methodologically – to make public the act of research through long-term collaborations with residents and other practitioners, using archival research and socially-engaged performance practice that reveals spatial changes and their affects on social relations [Harvie, 2013].

The thesis draws on the idea of ‘multiple publics’ to re-conceptualise a constructive approach to public housing and to evaluate the ethic of ‘making public’ [Fraser, 1990]. It works between architecture and performance to forge new connections with the research of Forty, Rendell, Schneider and Roms, and choreograph relationships between buildings, texts and residents through critical acts of writing, dramaturgy and re-enactment.

The practice is conducted through performative workshops that open a social, discursive and imaginative space for residents to re-enact the histories of each estate and build collective knowledge and experience. This collaborative work is shared with wider publics through a feature-length artist’s film Estate, site-specific performance Empty Words Build Empty Homes, and six-week exhibition Real Estates, and is documented in the thesis as two acts, comprising scenes interspersed with reflective essays. The evidence gathered is fed into formal and legislative frameworks with the aim of influencing housing policy: in Haggerston, a redesigned housing survey Housing Alternatives and at Balfron Tower, a successful Grade II* listing bid and online archive Balfron Tower: a building archive.

David was awarded a UCL Graduate Research Scholarship and an AHRC Studentship in Architectural Design.

David Roberts, ‘‘We felt magnificent being up there’: Ernö Goldfinger's Balfron Tower and the campaign to keep it public’, in Peter Guillery and David Kroll (eds.), Mobilising Housing Histories: Learning from London’s Past (London: RIBA Publishing, forthcoming - 2017).

David Roberts, ‘None of the Lively Detail’, in Eduardo Padilha and Torange Khonsari (eds.), My Home is Your Home (London: public works publishing, 2016), pp. 18-29.

View our publications catalogue on Issuu