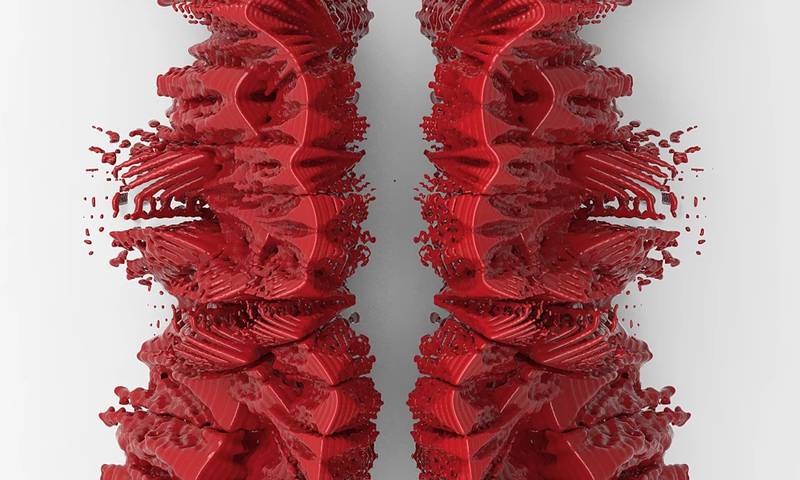 This research focuses on the importance of error in the evolution of form and the logic of matter distribution describing its relationship to randomness and repetitive behaviour. Using the logic of cellular automata systems on polar arrays of curves that describe body formations, it displays a methodology for the creation of errors.

Extracted cloud points are used as meshing guides for geometries that display a fine game balance between organization and disorder. Through a series of experiments, a taxonomy of bodies’ deviations and morphological errors is created resulting in a tooling system that can be applied in various scales and conditions according to the parameters specified, providing alterations to body form, optimization, and varied possibilities for interaction with the context, environment and other bodies.

The outcome is a series of structural and formal elements, whose proliferation is guided through sets of differential grids and leads to the build-up of big span structures and edifices. Different sets of experiments were created starting from linear structural elements and continuing to space dividers and larger surface components.

The detail resolution and the sculpting qualities that the experiments revealed from the very beginning, led the discussion to the Gothic architecture and the sculpting methodologies of Gaudi in Sagrada Familia. The multigrid of polar arrays of curves found reference to the curves that were guiding the form and the detail in gothic elements, describing the geometry of ruled surfaces that were intersecting, while they were transferring load and matter.

The grid that emerges from the gothic nerves, holds all the information of detail intensity, affects perforation, and light distribution. While in Gothic Architecture the ruled surface is the receiver of subcomponents of a different resolution and form, in Gaudi's Sagrada Familia, the ruled surface becomes the subcomponent.

The detail and sculpting results arise from the multiplication of the ruled surface, its rotational array and its intersection with its neighbouring subcomponents-ruled surfaces. In a similar way, the research methodology is used to construct parts of a cathedral as well as surface patterns, openings and detail resolution through grids resulting from Boolean union surfaces wireframes.

The aim is not to reinvent a new spatial arrangement but to rewrite the same spatial relationships through a different vocabulary.

Yota Adilenidou holds a Diploma of Architecture from A.U.Th. and a MSc. AAD from GSAPP, Columbia University. She is the Director of Arch-hives Ltd., a practice that focuses on the research of computational methodologies and digital fabrication for the evolution and activation of matter and form. She worked with Eisenman Architects, Evan Douglis and Sakellaridou & Papanikolaou Architects.

She co-curated the international exhibition Synathroisis, the conference Seeking Public Space, and designed experimental architectural installations for numerous exhibitions. She was an Adjunct Lecturer at the Department of Architecture of A.U.Th., the Programme Coordinator for DRL MArch in Architectural Association, a Visiting Lecturer at Hertfordshire University and she has taught workshops for Columbia University and at Ecole nationale supérieure d'architecture Paris-Malaquais for AAG 2012.

She is currently a Visiting Lecturer at University of Westminster, University of Brighton and London College of Contemporary Arts and a PhD candidate at the Bartlett School of Architecture at UCL.  She has been awarded and short-listed in many international and national competitions. She has co-edited the books Syn_athroisis and Belgrade Designing Growth.