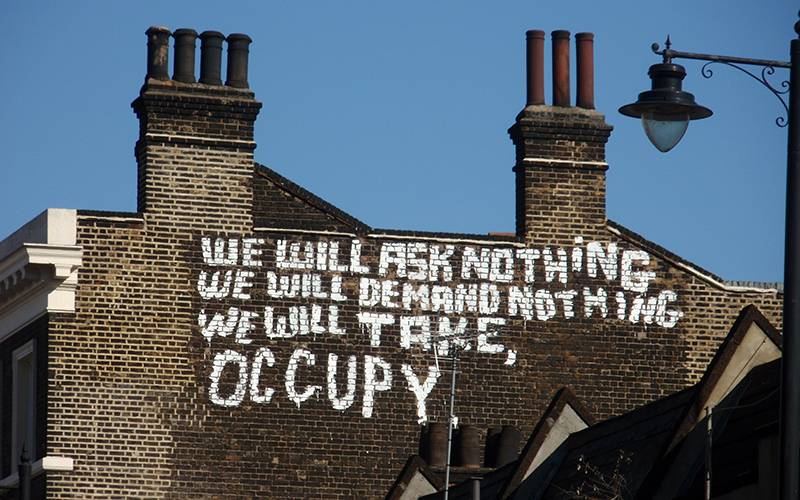 Graffiti, Street Art and the Right to the Surface:
A Semiotic, Cultural and Legal Approach to Urban Surfaces and Inscriptions

The vertical surfaces of cities are archives of urban identities, and contested terrains of occupation and visibility. They provide a location for numerous signs, markings and inscriptions, whose visual, material and territorial dynamic is under permanent negotiation. Sabina's thesis takes as its subject this dynamic between urban surfaces and inscriptions, to understand their spatial politics and their impact on urban cultures.

Her thesis focuses particularly on graffiti and street art as forms of surface inscriptions, and analyses their cultural, legal and spatial development from New York in the 1970s to contemporary London. Graffiti and street art are discussed in relation to neoliberal urban governance agendas, between criminalisation, eradication, and commodification as part of the creative cities paradigm.

Methodologically, Sabina's thesis engages with close readings of urban surfaces, as well as the discourses that manage them. Sabina proposes surface semiotics as an original method to interpret inscriptions in situ, which she uses as an analytical visual method throughout the thesis. Approaches from art, sociology, visual culture and legal geography are also used to address concepts such as the image of the city, urban property regimes, and issues of access and control of urban spaces.

Sabina's thesis is a contribution to urban studies, street art and graffiti studies, and a foundational step towards establishing a field of surface studies. Based on a close analysis of city surfaces and inscriptions, the main argument of her project is that urban surfaces are spaces of collective political production and agency, and are key sites for the exploration of urgent notions such as the right to the city and the urban commons.

Dr Sabina Andron is a London-based architectural historian and urban scholar specialising in urban public cultures in the neoliberal city, and methods based on visual, semiotic and legal analyses.

Her research interests focus on the right to the city, urban surface inscriptions and materialities, crime and transgression, and urban semiotics. She completed her PhD in 2018 at The Bartlett School of Architecture, with a thesis titled “Graffiti, Street Art and the Right to the Surface: For a Semiotic, Cultural and Legal Approach to Urban Surfaces and Inscriptions”.

Sabina currently lectures across London, working on the history of London architecture, the history of the home and interior design, neoliberal urbanism and city cultures, and graffiti, spatial justice and the image of the city. She was a UCL Grand Challenges grantee and organiser of the international Graffiti Sessions conference in 2014, as well as a British Council fellow at the Venice Architecture Biennale in 2016. She is the recipient of the 2020 Prosser award for outstanding work in visual methodologies, awarded by the International Visual sociology Association.