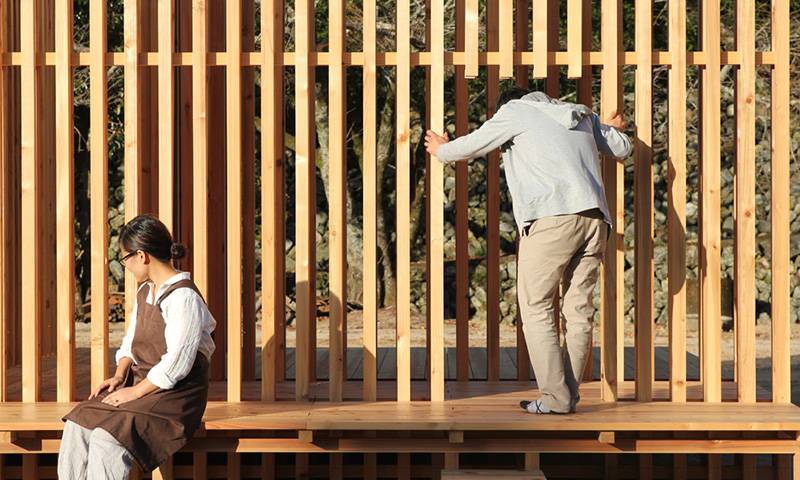 Engaging through the Threshold

Architecture is a verb. Active and in flux, movement is a generator of spatial experience. My research seeks to challenge the traditional static, object-oriented, and permanence-minded practice of architecture, in favour of an architecture that evokes our reinvestigation of space through movement and spatial experience.  Michel de Certeau’s ‘enunciative’ functions of walking - the appropriation of the topographical system by the pedestrian (co-production), the spatial acting out of the place (space), and the relationship between the pedestrian and the environment through movement (engagement) -  render movement as the catalyst of a bodily engagement with the built environment through space and time. I therefore seek to implement movement in design, so as to activate a more engaged spatial condition of experience.

Utilising the threshold as a methodological tool, I am exploring how this architectural element is the most active space within architecture. Ushering us in and out of spaces and offering opportunities for engagement with the built environment, the threshold is a physical manifestation of movement signifying transition from one space to another.

My practice lies between architecture and art as I employ the method of installations and interventions as a way for spatial experimentation and promoter of social interaction. Feeding research into praxis, I speculate on ways of adapting spatial interventions as architectural installations that will experiment with our perceptions of movement, time and space. The generation of these built works constitutes questions of spatial practice and focuses on our perceptions through sensorial effects evoked and enhanced through movement. The very position that my practice takes is between the thresholds of art and architecture. Through an interdisciplinary practice I am self-critical through the very nature of being challenged from both lens of art and architecture.

Gaining from my analysis of these conditions of movement, transition and passage I enlist the use of temporal installations, drawings of architectural provocation and speculate on how the careful consideration of movement as an element for design can enhance our engagement with the built world and with each other.

Quynh Vantu is a licensed architect and LEED accredited professional with a studio-based practice devoted to spatial experimentation. Drawing from her upbringing in the American South, Quynh is particularly interested in the notion of hospitality and thresholds of social interaction. Working in situ she creates her works across cultural boundaries and employs an interdisciplinary practice utilizing architecture as a foundation.

Quynh received her Master of Architecture (2009) from Cranbrook Academy of Art in the USA and her Bachelor or Architecture (2001) from Virginia Polytechnic Institute and State University in the USA. She has been awarded numerous grants and awards both nationally and internationally, including a Worldstudio AIGA Grant (2009), the Stewardson Kefee LeBrun Travel Grant-AIA NY (2009–10) and a DAAD Stipendium, Berlin, Germany (2010–11).

She has been awarded several artist residencies, including at the Bemis Center for Contemporary Arts in Omaha, Nebraska (2010); the Skowhegan School of Painting and Sculpture in Skowhegan, Maine (2012); the McColl Center for Art and Innovation in Charlotte, North Carolina (2014); Kamiyama AIR in Kamiyama, Japan (2015); and Nanji - Seoul Museum of Art in Seoul, South Korea (2016).

She was the recipient of a DAAD Stipendium to study at Olafur Eliasson’s Institut für Raumexperimente in Berlin, Germany (2010–11); a Fulbright Fellowship to study in the UK (2012–13); a University College London Scholarship to pursue a Ph.D. at The Bartlett School of Architecture (2014–18); a finalist Harvard GSD’s Wheelwright Prize for early career architects (2015); a grant from the Graham Foundation for the Advanced Studies in Fine Arts (2016) for her project Within the Horizon to be exhibited at Sverre Fehn’s Hedmark Museum in Hamar, Norway; and named a 2017 fellow of the Japan-US Friendship Commission for the US–Japan Creative Artist Program.