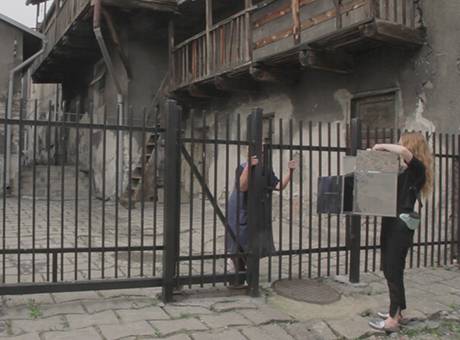 My doctorate addresses the processes of architectural disappearance, urban remembrance, and functional change in the context of dramatic social upheaval. The research focuses on the former shtetles, i.e. Jewish towns that once spanned throughout central/eastern Europe before the Second World War.

After the war they were repopulated by people of other nationalities who started to live in and reuse previously Jewish properties. Today the traces of the former Jewish populations have all but disappeared, not only from urban reality, but also from public discourse and social memory.

My PhD aims to formulate a design method, which reuses abandoned architecture, promotes social cohesion and stimulates urban regeneration, while facilitating processes of social remembrance and enables reconciliation with a tragic past.

During my practice-based research, I have completed several artistic-architectural interventions and designs related to the problems of disappearance and urban memory, such as a nomadic platform for urban protest JAD, a performance Nomadic Shtetl Archive Part I, and a temporary installation Signboard. Currently, I work on the concept of redesigning the Pre-Funeral House in Gliwice as a Museum of Upper-Silesian Jews, especially on an artistic installation The Cloud.

I am in the process of designing Nomadic Shtetl Archive Part II, a mobile archival unit. This nomadic reservoir of urban memory will travel along Shtetles Routes, which link former shtetles in Poland, Ukraine and Belarus.

Natalia Romik graduated from political studies at the Warsaw University. Since 2007 she works as an active architect, designing exhibitions and buildings. She has authored numerous artistic activities, installations and performances. Her projects explore problems of cultural memory, ephemeral aspects of architecture and urban emptiness.