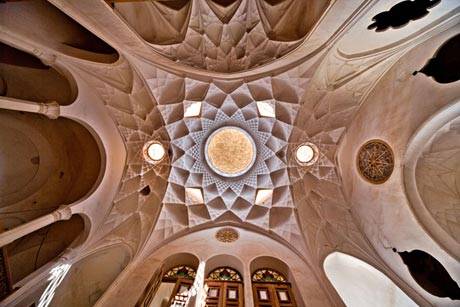 Muqarnas were developed to a high standard of beauty and complexity, in the rich, tectonic and ornamental tradition of Islamic patterns over a period of eight centuries. In the twentieth century, however, muqarnas patterns were rejected by Modernism and were neglected completely. With international architecture there is a lack of reference to either local history or vernacular architecture, and sadly muqarnas were introduced in buildings as a static design rather than as an evolving form.

This research aims to preserve the local identity of Islamic architecture along with generating new possibilities for the muqarnas, which may introduce both an interior and exterior visual experience. This may be achieved by articulating various typologies that challenge the conventional divisions of wall and ceiling, surface and volume, opaque and porous, monochrome and colours of Islamic architecture to develop the revival process of a historic form.

The research also aims to look into spatial, colour and environmental qualities, and how light and wind affect colour and spatial configurations.

Considering both the muqarnas’ characteristics (fixed values) and attributes (the variable values) which define its form, reviving the form might be achievable by providing new values to the muqarnas’ attributes. The research goal is therefore to produce a set of techniques, tools and processes that inform the design process of contemporary possibilities.

She worked at Zaha Hadid Architects (ZHA) for three years, working on a variety of projects such as the Signature Towers of Dubai, the Syrian Parliament new building, and the King Abdallah Petroleum Studies Research Center (KAPSARC) in Saudi Arabia.