Judit Ferencz | PhD Thesis | The Graphic Novel as an Interdisciplinary Conservation Method in Architectural Heritage: A Book of Hours for Robin Hood Gardens 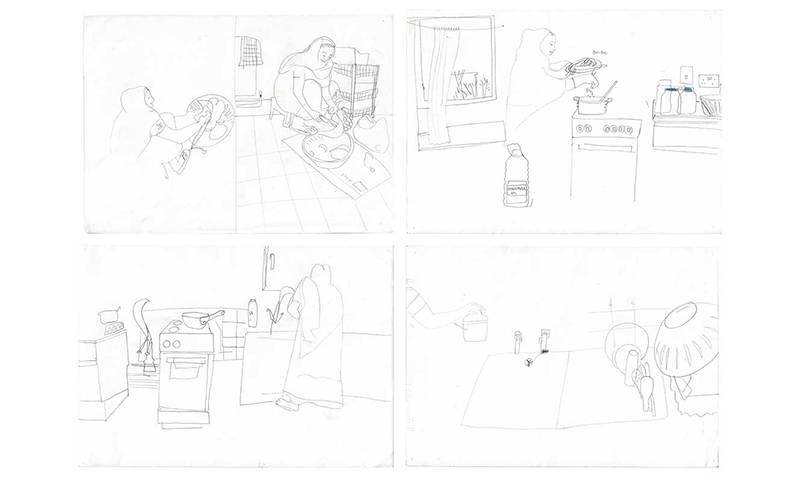 The Graphic Novel as an Interdisciplinary Conservation Method in Architectural Heritage: A Book of Hours for Robin Hood Gardens

The housing crisis in London necessitates re-thinking the role of architectural heritage listing and to search for alternative forms of preservation of values disregarded in conventional conservation. My research aims to develop a new critical methodology for conservation and architectural heritage practices, through the medium of the graphic novel.

My architectural case study is the East London housing estate Robin Hood Gardens, which was refused heritage listing in 2009 and 2015.

The proposed methodology draws on my own practice as an illustrator in publishing, in addition to the Hungarian conservation practice of falkutatás (‘wall research’) and the theoretical influence of Jane Rendell’s ’Site-Writing’. Falkutatás is a practice that applies archaeological stratigraphy to walls of historical buildings. It was developed in the 1960s in Hungary and used during the Cold War as a means to reveal historical continuity. It is particularly significant to this project as the Smithsons, the British architects of Robin Hood Gardens, were involved in numerous conservation projects in Hungary during this period. My proposed methodology will re-evaluate falkutatás as a method for tracing historical layers, by reading it through what Rendell defines as site-writing – the ‘material, emotional, political and conceptual’ sites of research.

The graphic novel will be critically re-worked through the historic and temporal literary form of the Book of Hours, late medieval illuminated manuscripts. This will be looked at through the concept of narratology in the works of Ricoeur and Genette, where the time of the telling is combined with the time of the told. The potential of this means that the medium itself becomes a starting-point for rethinking, through images and words, the process and temporality of conservation. The resultant reworked graphic novel will be used to communicate to my audience – government bodies, architects and residents – processes disregarded in conventional conservation.

Judit Ferencz is an illustrator. She has published with Vintage Classics, Random House and Granta. Her PhD research in architectural design at The Bartlett, funded by the RIBA LKE Ozolins scholarship, develops a new conservation method in architectural heritage through the medium of the graphic novel. She studied illustration and animation at Kingston University, and art history at ELTE University, Budapest. She is a part-time illustration tutor at City Lit and London Metropolitan University.