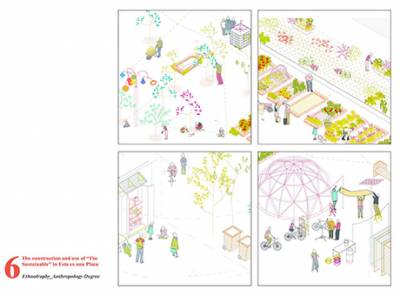 In 2008, the outbreak of the international financial system opened up a time of economic recession in Europe, especially severe in its Southern regions. The austerity measures imposed in these countries, far from alleviating the economic downturn, gave rise to huge social mobilizations, triggering a deep institutional crisis.

From Portugal to Turkey, claims for a radical political overturn, which sprung with an unusual and extraordinary strength in the European Spring of 2011, have reconfigured the political landscape and reformulated the citizen practices.

This research focuses on two cities of two of these Mediterranean countries; Athens and Madrid. Both cities experienced a great economic boost and territorial growth in the early 2000s as a result of highly neoliberal political agendas.

The model of expansionist urbanism driven by heavily market-led policies and projects, led to the spatial fragmentation of the urban fabric with increasing problems of mobility and pollution and the polarization of uses and rents in the territory. The persistence of the crisis aggravated those effects, stretching the social inequality, weakening the neighbourhood associative fabrics and triggering a serious housing crisis with a dramatic rise of forced evictions.

Yet, on the other hand, the massive social protests that initially took and camped in the main squares of both cities; Puerta del Sol and Syntagma, opened up a space for contestation and widespread awareness of the impacts of that paradigm on the city and its development. The occupation of the squares enabled a spontaneous configuration of multiple small citizen organizations, aiming to establish a new political agenda both at the national and the local level.

Eventually, many of those groups found in existing grass-roots associations in the neighbourhoods a space to crystalize in distinct forms of insurgent citizen-led initiatives, which are already introducing and experimenting with new organizational, governance, economic and spatial forms.

This project endeavors to explore what has been tentatively named Infrastructures of Caring Citizenship, referring to those aforementioned spaces constitutive of existing arenas of contemporary changes in Athens and Madrid, and newly powerful agents in ongoing processes of urban regeneration. The research will specially focus on narratives, practices and spaces of commoning and caring, aiming to bridge them, both theoretically and on the ground, through ethnography and architectural design.

Isabel Gutierrez Sanchez is an architect (ETSAM, 2012) and anthropologist (UCM, 2013) by training with a deep interest in the urban field in its multiple dimensions and scales. Her dual social and technical vocation consolidates through her experience in university exchange programmes in India (CEPT University, Ahmedabad), Germany (TUBerlin) and Ethiopia (Addis Ababa University of Architecture), and her participation in international projects of city development in Nouakchott (Mauritania) and San Salvador (El Salvador).

The impact of the 2008 financial, economic and institutional crisis on the processes of urban development, the architectural praxis and the citizen practices in her country and hometown, Madrid (Spain), profoundly influences her political awareness as well as her commitment to interdisciplinary research and social activism as the means to induce a change in the urban paradigms of her context.

After three years of practicing as an architect and editor in an architectural magazine, in 2014 she gets the opportunity to return to academia, completing a MSc in City Design and Social Science at the LSE, prior to starting her PhD in the Bartlett School of Architecture (UCL) funded by Obra Social La Caixa.