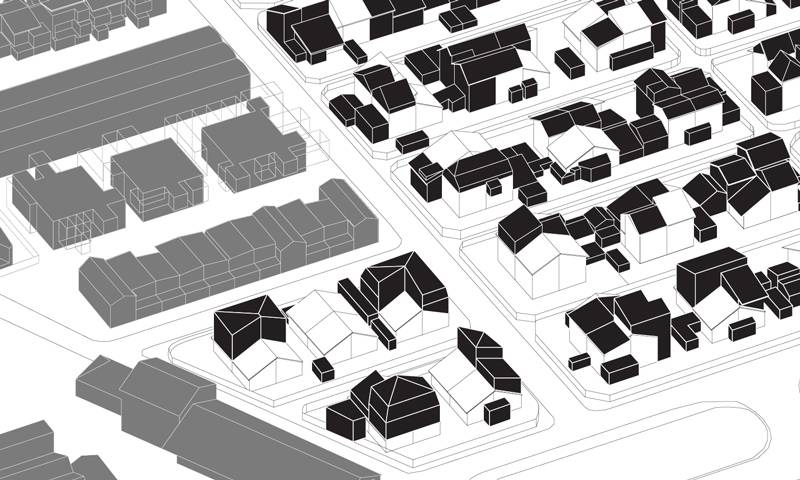 Adaptability of the Urban Form: Mapping Changes Over Time and Across Scales

This thesis investigates physical adaptability of the urban form in the 19th century working-class housing scheme of Cité Ouvrière in the city of Mulhouse. The research is based on the assumption that other things aside, housing forms that are not sufficiently adaptable to effectively accommodate changes over time will eventually disappear as they fail to remain fit for their users and to retain their value.

To explore this, the study examines how streets, plots, and buildings change over time, from 1850 until the present. More specifically, it asks how these spatial structures co-evolve in relation to each other and to concurrent social conditions, and how their transformations impact on network centrality and built density. Such knowledge can arguably be crucial to informing architects and planners about factors that may contribute to the social and spatial sustainability of the existing and future urban form.

Founded on the theories and methods of the classical and quantitative urban morphology, specifically space syntax and Spacematrix, the study focuses on small-scale incremental typo-morphological adaptations and their aggregate emergent impact over time and across scales. It first explores the evolution, continuity and transformation of the street network in the city of Mulhouse, revealing mechanisms of change and their impact on centrality patterns. Then, it traces incremental volumetric adaptations of single-family houses in the neighbourhood of Cité Ouvrière, and the effect of building growth on built density and space consumption.

Findings are discussed against a set of historical and socio-political conditions to construct a comprehensive picture of formal adaptability and how this is defined and manifested across different spatial scales. The research is innovative for its historical depth (165 years), high-resolution approach (in terms of scale, time, and extent of study), and the methods used to map and measure the synchronic and diachronic processes of physical transformation (including historical and archival research, field survey, and diachronic 2D and 3D modelling).

Fani is an architect and urban designer. She studied architecture at the National Technical University of Athens (NTUA), holds a Master's in Urban Design from ETH Zürich and an MRes in Spatial Design: Architecture and Cities from The Bartlett, UCL London.

During her doctoral studies, she organised international workshops, lectured, and exhibited in Europe, Asia and America. In 2017, she joined the Department of Architecture and Computation at MIT as a visiting researcher and participated in the EU-funded Future Architecture Platform activities in Slovenia, Serbia, Kosovo, and Ukraine.

Fani works, writes, and publishes in the expanded field of architecture and urban studies. Her core research interests include urban morphology and transformations, spatial analysis and data mapping, housing, informality, and design research. Currently, Fani is an EPSRC-funded doctoral student at The Bartlett School of Architecture and a Fellow of the Higher Education Academy (UK).