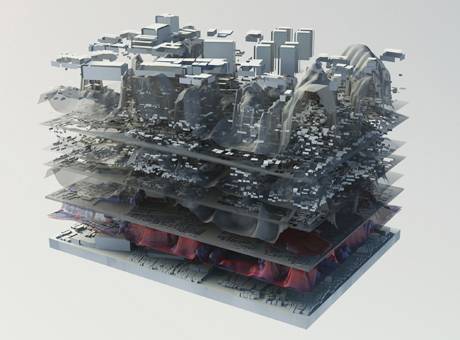 A model of the informal urban planning processes of Guangzhou

Space is real, for it seems to affect my senses long before my reason (Bernard Tschumi)―Space is real in the epoch of simultaneity; we are in the epoch of juxtaposition, of the near and far, of the side-by-side, of the dispersed (Foucault 1967). The city is no longer a single entity in space and time but a dispersed mass of ‘enclaved’ characters interacting to form contested urbanism.

The southern region of China; between Hong Kong, Shenzhen, and Guangzhou known as Pearl River Delta is―according to the United Nations Habitat report― the largest and the fastest growing megalopolises in the world. The region houses approximately 120 million people with a rate of urbanisation over 44 per cent.

Guangzhou, the “factory of the world” as one of the megacities in the region is going through rapid urban transformations that generate both peace and conflict. The informal urban areas of Guangzhou takes place in “other spaces” the in-between zones of juxtapose that allow for all systems, networks, and relationships to take place among different scales over time; the boundaries where the new development interacts with the old urban entanglement.

The informal planning processes and building development within these spaces allow for this flexibility. It is in the interest of Architects, urban designers, and city planners to include these informal processes as part of thinking on architecture and urbanism.

In questioning, what are the actual real-world processes of urban planning and building development within an informal urban area of Guangzhou, this thesis aims to provide a model, a tool to expand conventional precedents of urban planning and urban design practice. As Rem Koolhaas explored in S,M,L,XL the “new urbanism” will not be based on fantasies of order and omnipotence; but on the staging of uncertainty; no longer concerned with the arrangement of objects but with the irrigation of territories with potential (Koolhaas 1994).

Daniyal Farhani completed his Masters in Architecture at The University of Auckland where he investigated the heterotopias and the networked spaces of other dimensions in the city of Guangzhou. Since then, he has worked in a number of international architectural and urban design practices around the world, has contributed to a number of publications including STUDIO Architecture and Urbanism Magazine, and has claimed a number of awards according.

In his research at the Bartlett, Daniyal builds on his early knowledge and interest of complex urban realm to provide a tool for urbanism. He is currently practicing architecture and urban design in London and is editor-in-chief of the online publication platform CRADink.