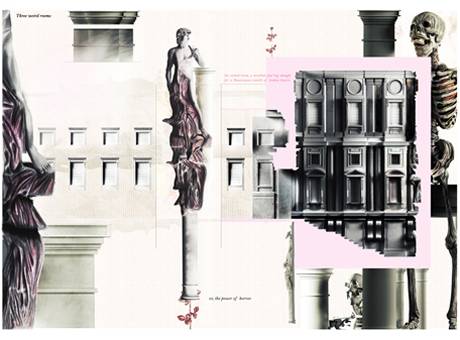 After Michelangelo, A Contemporary Baroque

Dominique Barrière, engraver and painter, recalled seeing an architectural treatise by Michelangelo “many times” while working in Borromini’s workshop. Barrière stated that the treatise contained “many beautiful lessons in architecture”, with Michelangelo concluding “the best lessons were those of the architect’s own genius”. Paradoxically, the treatise argued for its own rules to be transgressed in its teaching of originality.

Last seen in the 17th century, the treatise holds a modern significance due to its oppositional axioms. Later, discussions of style, such as Wölfflin’s Renaissance and Baroque (1888) and Principles of Art History (1915), retrieved the Baroque from the realm of aberration, through codifying a set of stylistic features which were previously considered as unguided. Such studies outlined the Baroque’s logic to be a willed corruption of key Renaissance ideas, such as harmony, planarity and austerity.

This design research project aims to resituate Michelangelo’s thinking within the Baroque as its very instigator, away from a current positioning within architectural mannerism and the High Renaissance. An investigation into his missing treatise will re-evaluate the significance of his work for contemporary architectural design. It argues that Michelangelo’s architectural designs show how Baroque thinking transposes time, space and representation into a cyclical-historical model of design.

Through the enabling of a new style via its active corruption of the existing, an ‘objective’ Baroque logic can be transposed to modern day practice as the grounds for an oppositional design methodology. Rather than debating its existence, this research will attempt to reconstruct Michelangelo’s lost text as part of a speculative design method. The Baroque, and the logic for its emergence, is to be recast through a theory of design, aesthetics and art.

References will be made to the aesthetic and materialist continental philosophies of Nietzsche, Bataille, and current speculative realist philosophy.

Daniel James Wilkinson completed his MArch at The Bartlett in 2014 and has taught architecture at both The University of Hong Kong and London South Bank University.