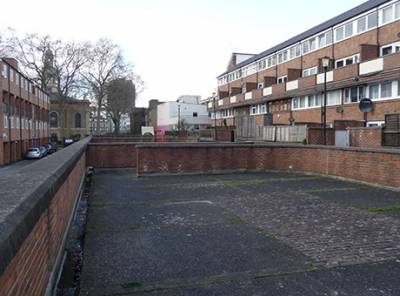 London is experiencing a very high demand for housing whilst prices are rising at around 10% per annum. Inner London housing estates which are owned by local authorities often contain under used land in the form of air-rights above single storey garages, left over corners of undefined public space or buildings whose use has ceased such as first floor playgrounds.

This project aims to establish the potential for small sites on public housing estates to be used as sites for community self-build projects. The objective is to build such a project and test its viability.

Further it is necessary to explore sites in the current study area, which is in Hoxton, London and record the data found in a coherent manner which is scaleable and potentially parametric.

The intention is to develop scaleable processes which can help to identify and catalogue such spaces including significant data such as site area, potential height and adjacency. Generally this kind of exercise has been carried out in two dimensions. Adding height geometry to such mapping allows sites to be found which are often otherwise ignored.

An interactive form of such mapping can allow local residents to discover and influence where new development might best be placed. Software will be developed to contribute to future site finding and explore issues such a neighbouring rights to light.

Public engagement projects to test the willingness of Hoxton residents to participate in community self-building are an important feature of the work. They  present the research outside the university and foster connections between UCL and wider audience of residents and potential builders.

William Hodgson is an qualified architect who is both a practitioner and educator. He teaches at the Bartlett UCL and is undertaking research into the role of self-building in solving the housing shortage in London. Other work undertaken by his practice, Hodgson Gabb Studio, includes two self-build housing projects one in London the other in West Cornwall. Formerly a local Councillor and Chair of Hackney’s planning committee he went on to sit on the Olympic Delivery Authority’s planning committee for 6 years until 2012.