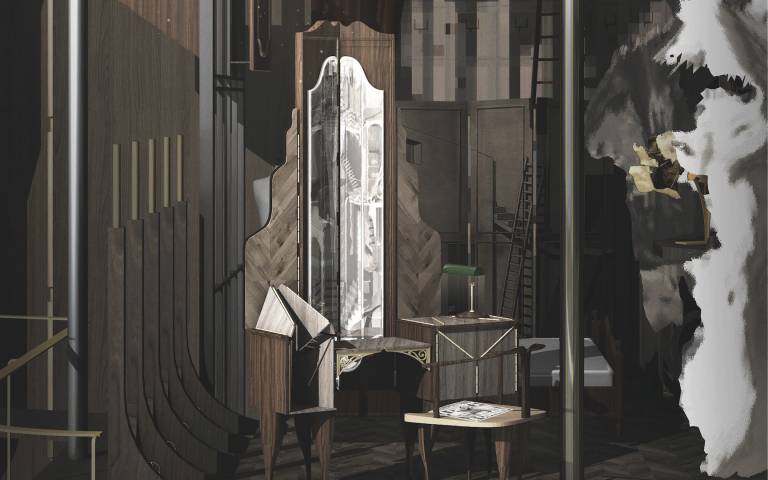 RIBA Journal’s annual Eye Line competition invites students and practitioners to share their architectural drawing and rendering skills. The free-to-enter competition celebrates the most accomplished work from around the world, with students and practitioners each judged in their own categories. Student work is eligible if it was produced within the last three years while in architectural education. The 2022 competition called for work that defies the blinkered outlook of the last two years and posits a sense of optimism and hope.

Mengqiao Zhang’s winning entry explored issues of surveillance capitalism and reimagined George Orwell’s 1984 storyline, signifiers and metaphors as architectural space. Judge Kester Rattenbury called the work “a very beautiful surrealist image that’s not just about the render; it feels as if the drawing itself is a form of exploration.” Taking the second prize, Sabina Blasiotti’s evocative infographic presented and classified nuclear waste materials within a mountainous structure, asking viewers to confront the problem of its storage and disposal. Tyler Thurston scooped the third prize with a a richly saturated project that proposed handing over EU leadership to children, tasked with leading adult society toward a more sustainable way of life and acting as guardians of a water management system.

In 2020, the age of surveillance capitalism, the content of George Orwell’s 1984 (1949) is happening in an alternative way: the value of privacy diminishes while human behavioural data is monetised. The project sets against this issue by translating the book’s storyline, symbolic objects and metaphors into architectural spaces. Mr Smith is designed to be a parallel protagonist for a hybrid cupboard dwelling. The cupboard can be unfolded, showing the duality of appearance and substance. The final drawings provide an unusual experience through odd viewpoints and glimpses that recontextualise the dwelling within reality.

The Village Inside the Nuclear Power Plant 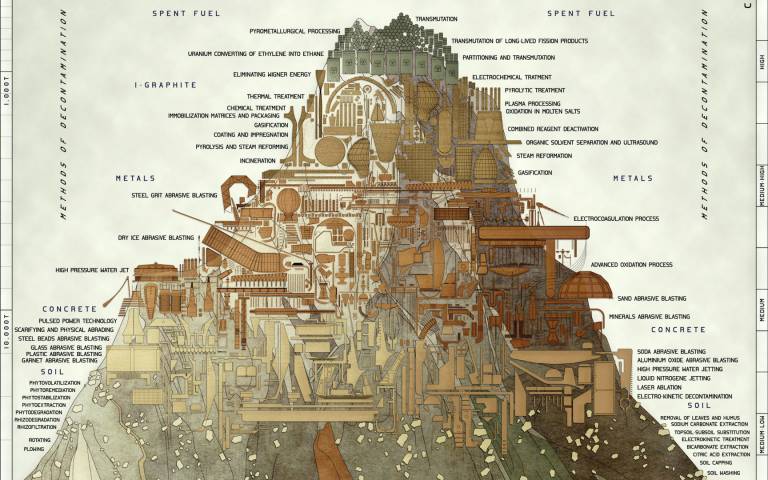 This project proposes a recycling and recovery of nuclear waste, postulating and predicated on the progress in current experimental decontamination technologies. An infographic summary illustrates nuclear decontamination and recycling techniques, exploring a direct, critical response to the controversial practice of burying nuclear waste in deep geological repositories.

The narrative draws upon the complex relationship between Japan and nuclear power, the latter depicted by post-war architects, such as Arata Isozaki, as part of a natural cycle of death and rebirth. Ultimately, the architecture aims to present radioactivity as a natural phenomenon that can and should be addressed, attempting to advance a response to the nuclear waste crisis, the heritage of nuclear power plants and the economy of the villages that depend on them for their own power needs.

What if George Had the Recipe to Create EUtopia? The strategy – fiction as a tool for awareness – reconfigures the European Union by protecting the Mediterranean Sea, and encourages an alternative participatory democracy. Inspired by Roald Dahl’s George’s Marvellous Medicine (1981) and the ways of seeing provided by George and children from EU states and North Africa, the architecture examines the thresholds between ideology and pragmatism when engaging with nature, landscape and weather, with the aim of eroding politics and geography.

Environmentally-friendly ingredients including salt, eggs, plant pigment, bees wax, peas and olive oil are cultivated to protect water safety and equality for all. Looking towards the unconventional, the architecture offers a series of delightful learning experiences (in a similar way to a Dorling Kindersley book), delivering knowledge by inspiring curiosity and play. In this synthesis of responsibilities and innocence, children are the champions of their own sustainable future, adapting the core message of love and hope for the EU.

The three winners all exhibited at The Bartlett Summer Show in previous years. Mengqiao Zhang and Tyler Thurston graduated in 2020 from units PG15 and PG10 respectively, and Sabina Blasiotti, who studied in unit PG12, graduated and exhibited in 2021.

The winners will be showcased in the July/August edition of RIBAJ magazine, and invited to a winners’ party hosted by RIBA, and their projects will be considered for inclusion in RIBA’s Drawings and Archives Collection at the V&A Museum.