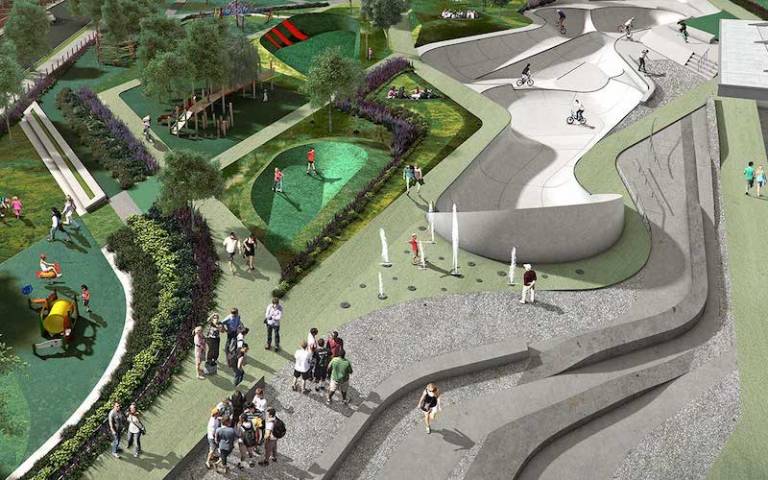 The awards were established in 1977, and celebrate excellence in design and construction in concrete. The jury panel of construction industry professionals highlights projects in which concrete, in any form, contributes significantly to the built environment. The skatepark took the prize in the Element category (for small projects), as well as the overall annual prize.

Led by Enriqueta and Eduardo Rico, who also tutored at The Bartlett, LlabresTabony Architects originally won the tender to design the skatepark for Dublin City Council in a 2016 international design competition, beating design teams from around the world to take on the project. Relational Urbanism were the project architects, working with project engineer Robert Barry Consulting Engineers, project contractor C&A Build & Civil and suppliers Roadstone.

The team invited community participation by modelling the skatepark with a digitised environment comprised of a sandbox and 3D cloud capturing via Kinect. Participants could use their hands to shape their ideal skate park with simple tools (wooden spheres, cylinders and small trowels). These models were captured and fed into a 3D model which ultimately formed part of the overall proposal. The use of the modelling tool enabled different members of the BMX community to be actively engaged in the design process, and encouraged senior members of the community to offer perspectives on safety and pedestrian issues. Similar events also took place in local schools, inviting further ideas from children about play spaces.
The park includes three differentiated concrete skate zones, as well as softer areas for younger skaters and an area with play furniture, and a wildlife area. The leisure offer is concentrated in the upper area, centring a critical mass of activity around the BMX-skate facilities. This allows for interaction between activities as well as round the clock cross-surveyance from different age groups within the park. The main entrance to the park is through a small plaza which invites users to choose between activity and age circuits within the park,  and a path system, open 24/7, allows passage through to the football pitches and Cherry Orchard directly and provides different user experiences.
Awarding them the prize, the judging committee commented,

“The jury was extremely impressed by the smoothness of the concrete surface archived across the three-dimensional skate/BMX piazza, bowls and transitions. This is a project of complex undulations that demonstrates the careful use of in-situ concrete to create a highly successful amenity of which the community is justifiably proud.”