The installation by three Architecture MArch graduates is on display throughout June. 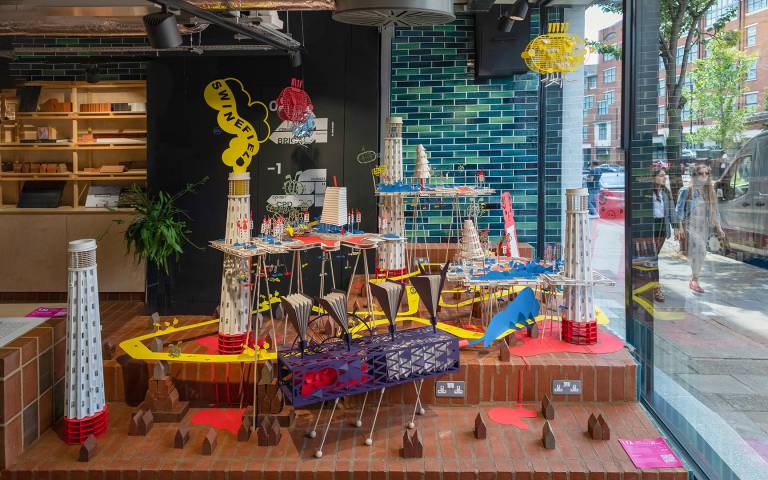 The London Festival of Architecture is the world’s biggest annual architecture festival. Offering a diverse programme of largely free public events at venues across London throughout June, it celebrates London as the global hub for architecture and attracts hundreds of thousands of visitors every year.

Inspired by the fairy tale of ‘The Three Little Pigs’, EH Smith’s brick-making legacy and its shopfront near Smithfield Market, the paper installation re-imagines a continuation of this well-known story. The design follows the three little pigs’ escape from Smithfield, showing them expand their brick houses in a city called Swinefield, where they live happily ever after.

The founders of Ten Tectons all graduated from PG Unit 10, taught by CJ Lim and Bernd Felsinger. Now practicing architects, the three formed the collective in 2021 to collaborate on cross-disciplinary, experimental projects and deliver fun and unexpected moments in everyday life. They have so far created built public interventions in Charing Cross Station, London Bridge Station and the Design Museum, and their work has been featured in the Victoria & Albert Museum and the Sir John Soane Museum.

Ten Tectons’ installation is on show at the EH Design Centre, London, and runs until 30 June.