Success for Bartlett students at the 2018 RIBA President's Medals 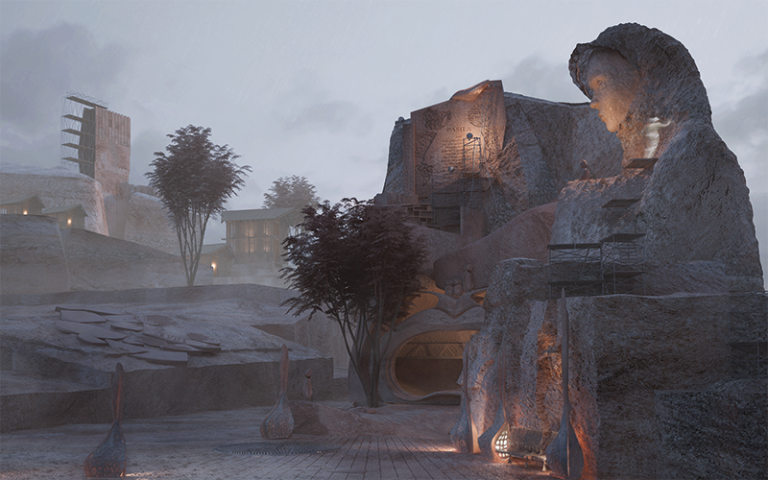 2018 Architecture MArch graduates, Sonia Magdziarz and Sam Coulton, and Architecture BSc graduates, Camille Dunlop and Grey Grierson, have all been recognised at this year’s RIBA President’s Medals ceremony which took place on 04 December.

Sonia Magdziarz has been awarded the RIBA Silver Medal for ‘How to Carve a Giant’, a project which proposes an architecture capable of keeping contemporary forms of knowledge safe by carving a folk story into the rock underbelly of Helsinki.

The Silver Medal is awarded for best design project produced during Architecture Part 2. Speaking of her win, Sonia said “I feel pure joy to be recognised and appreciated. I could noy imagine a better ending to my education at The Bartlett.”

Sam Coulton won a commendation in the same category for ‘London Physic Garden: A New Necropolis’, a project exploring a new relationship with death through the use of botanical gardens. This environmental method, in which bodies are converted into water, allows reimagines a society in which death is seen as something beautiful.

Commenting on his commendation, Sam said:

“I am so delighted that my work has been commended by the RIBA this year, it is such a wonderful way to end 5 years of study at The Bartlett. It is in no small way the result of the dedication of my tutors.

Architecture BSc student, Grey Grierson, won the SOM Foundation Fellowship UK at Part 1 for his design project ‘Negotiation of States: A Crematorium and Columbarium in Hong Kong’. The project proposes a system that responds to the lack of space to house the dead within the city of Hong Kong.

Camille Dunlop, Architecture BSc student, received the Serjeant Award for Excellence in Architectural Drawing for her project ‘Pipeline Hijacking’. The project imagines how a community could hijack, grow along, and be informed by, an existing infrastructure of an Icelandic Geothermal Pipeline Network, which supplies a constant stream of hot water.

About the RIBA President’s Awards

Established in 1836, the RIBA Awards receive submissions from around 350 institutions from over 70 countries around the world.