ScanLAB at The Photographers’ Gallery

Bartlett alumni and tutors Matthew Shaw and William Trossell have produced a new work for The Photographers’ Gallery’s Media Wall. 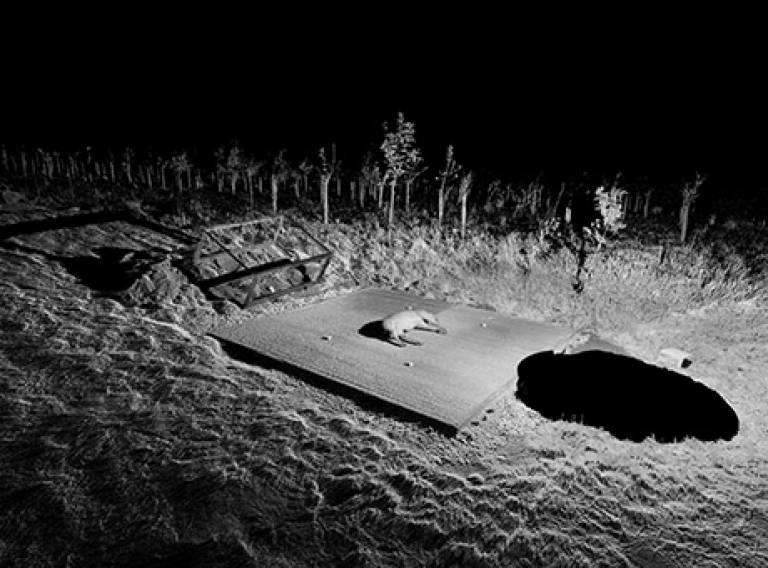 Horizontal Humans was commissioned as part of the gallery’s forthcoming season on Forensic Imaging. The project invites viewers to witness a series of forensic experiments monitoring bodily decomposition through the robotic eyes of a 3D laser scanner. In the experiments, pigs act as anatomical substitutes for human bodies found in criminal investigations. Under the scanner’s forensic gaze, the undulations of the decaying animals are translated into a dramatic and visually arresting 3D point cloud. Through this process the artists explore the scanner as both a tool for 'objective'scientific measurement and a highly subjective imaging device. The work will be on display until 10 January 2016 and ScanLAB Projects will discuss the potential and limits of new imaging technologies in relation to the project at an artists' talk on 15 November.

ScanLAB Projects is a London-based design studio founded by Bartlett School of Architecture alumni Matthew Shaw and William Trossell, which experiments with the potential of large-scale 3D. For the last five years they have been turning the relentless, machinic eye of the 3D scanner on anything and everything – from giant mirrored sculptures to Arctic ice flows, Roman Sewers and dancers. Their practice explores the world through the eyes of this post lenticular technology, creating animations, images, objects and installations in response to the data they capture. Their work has been broadcast internationally and exhibited at leading cultural institutions across the world.