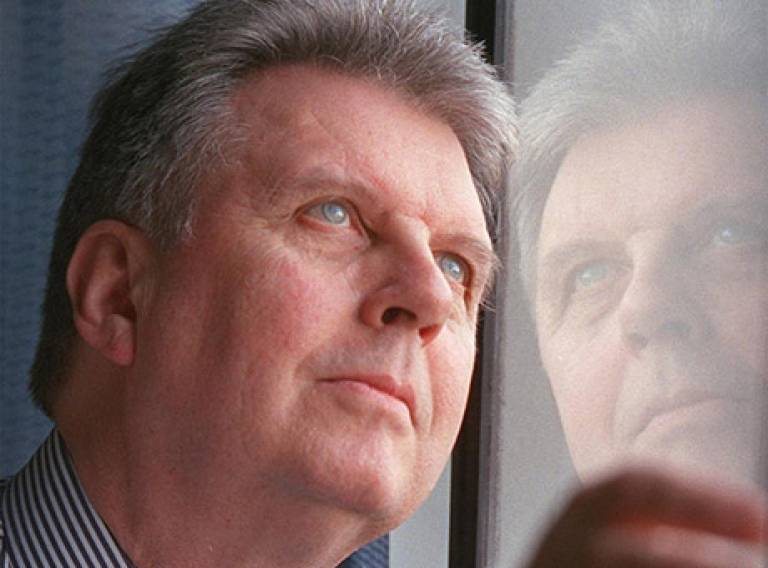 It was with great sadness that we heard of the passing of Professor Ranulph Glanville, who died on 20 December 2014. Glanville was appointed as a Senior Lecturer at The Bartlett in July 2001 and in 2007 became Professor of Architecture and Cybernetics. After his retirement in 2011 he continued to supervise PhD students. Glanville is remembered here by his friend and colleague Professor Stephen Gage.

I first properly met Ranulph when he and I were invited by Alvin Boyarsky to form an Intermediate (Degree) Unit at the AA in 1975. I already knew him; it was impossible not to. By the age of 29 he already had a formidable reputation as a maverick, an arranger of extraordinary events. He had already taught in the AA first year. I am sure that one of the reasons that Alvin invited me to teach with him was to ensure that he had a straight man – an older, wiser head who knew a little practical architecture – to keep him on track. I was 31 at the time.

Ranulph was in the process of completing his first PhD in Cybernetics with a thesis entitled ‘A Cybernetic Development of Epistemology and Observation, Applied to objects in Space and time (as Seen in Architecture)’ which tackled the question of what structure might sustain the belief that we all see differently, yet believe we see the same thing. He called this his theory of objects. I knew something of cybernetics, having studied with Gordon Pask in my fifth year at the AA and having been amazed by the Cybernetics Serendipity exhibition at the ICA, but this was something completely different. It was a form of philosophy. I spent the remainder of our friendship trying, without success, to persuade him to apply his formidable understanding of systems to a directly practical problem. The nearest he ever got to this was to help countless students to define their own practical (and philosophical) problems.

He left the AA in 1979 to teach at Portsmouth University. Teaching at Portsmouth allowed him the possibility of taking a further doctorate in human learning, which discussed how we understand architectural space. This (and over 350 articles and papers) would lead, in 2006, to a DSc in Cybernetics and Design from Brunel University. While he was at Portsmouth University he began a career as a peripatetic academic. When he left there in 1997 he became a professor travelling around the planet with major stopping off points (and professorships) in Belgium, Australia, Hong Kong and the UK where he was a Professor at The Bartlett and latterly Research Professor at the RCA.

Ranulph had a formidable intellect and physical presence. He was a showman who loved to be in control of the situation. Yet his relationship to control as a concept was ambivalent. He was a composer and was very interested in music; the music that interested him most was often spatial and always at or beyond the edge of control. He would, for example, always direct students to the La Mont Young installation in New York as an example of an extraordinary and ambiguous acoustic space.

Here is Ranulph talking about control; I have taken it from the obituary published by the American Society of Cybernetics, of which he was president:

‘If you slow things down then you see nuances that you wouldn’t normally see. That is revealing – slowness has a particular quality of its own. It is difficult to slow things down and to simultaneously keep alert. Being caught in between, being a bit lost, is good for a human being. Things have their own time, and we should learn to enjoy this, rather than imposing our own, usually rushed time. A little slowness, living in the now, and a reduction of the significance of the nation state might really help us.

‘A lot of my cybernetics is philosophical in nature, a lot of it goes against conventional cybernetics, which is in general focused on purposeful systems – systems with goals. I’m just as interested in systems that don’t have goals. So I am better at keeping my eyes open for opportunities than in taking them. If I leave myself open to see possibilities and if I leave space for people to offer “gifts” to me, then I often get some extraordinary opportunities which I could never have hoped for. That’s the opposite of the cybernetic goal-oriented system. In cybernetics, I’m interested in the transcendental questions or frameworks within which cybernetics happens, which we tend to assume in order to be able to act. I’m interested in what those assumptions are: what they imply. In that sense I’m someone who looks at the foundations and questions them ¬– someone interested in the relationship between “freedom” and the “machine”. The most remarkable characteristic of human beings is that we create patterns. Without the ability to create patterns we wouldn’t be able to think. That’s what I do: generally at a rather abstract level.

‘I’m interested in a society that minimises the impact of society and maximises the space for the individual. I will argue against control. Not all control, but against our assumption of the universal possibility and desirability of control. We are aware that our attempts to control are often inadequate. We usually excuse this as due to exceptional circumstances, or an inadequate description (one without enough variety). But I would like to suggest an alternative to always making excuses. We can ask ourselves what happens if, when there’s a serious variety imbalance, we give up trying to control? If we don’t try to force the system we had thought to control into having as little variety as we have? Then we are left with a vastness of variety (and hence possibilities) that goes way beyond our limits. We can be flooded, not by water inundating us, but by possibilities we had never dreamt of.’

My partner and I last met Ranulph and his charming wife Aartje in early December. He was already very seriously ill. They were in London so that they could go to three concerts pretty much back to back. He told me then that the best way to command attention was to die before your time, or be in the process of doing so. There are, I understand, three films being made about him. Aartje showed us the photographs of the very elegant sunroom in their house that he had designed for himself and which was now complete. He was in the process of completing the composition of his ‘death march’.

He will be missed by all of his friends but I like to believe that he will be with us in many ways for a considerable time to come.