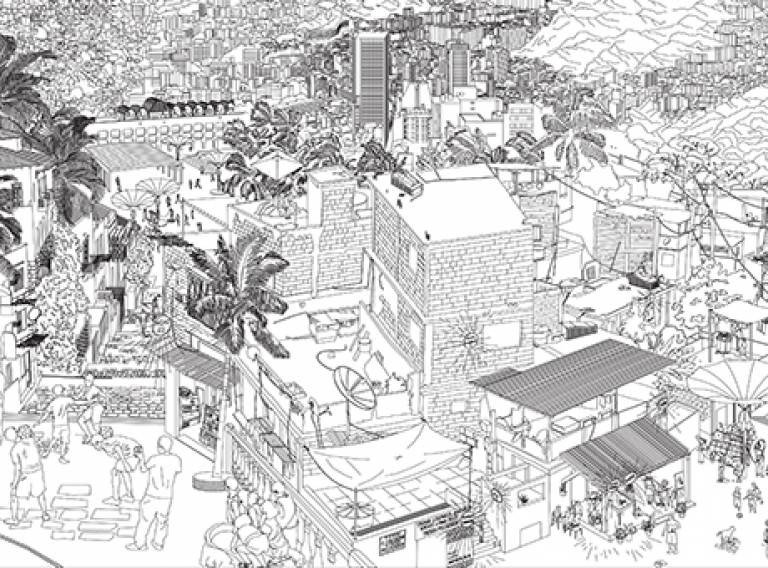 Kostourou was part of the interdisciplinary team working on the mega-city of Rio de Janeiro. Students and researchers from ETH Zurich’s Master of Advanced Studies in Urban Design worked together with RUA Arquitetos from Rio de Janeiro, on developing Varanda Products, a 14-month initiative of tactical urbanism which intends to foster urban improvements through consumer products. The cariocas (Rio’s inhabitants) have always found ways to appropriate and subvert their built environment through puxadinhos—add-ons to existing structures made from leftover materials. Inspired by puxadinhos, the proposed products accommodate the logic of the market in order to transform it. As an interface between individual and community, the varanda offers a middle ground for negotiation, gathering, and play. Varanda Products is a catalogue of everyday consumer products that promotes city-making as a collective endeavour bringing together diverse social milieus. Insinuating itself everywhere, Varanda Products encourages small-scale urban entrepreneurship with the openness and playfulness typical of the carioca way of life.

Kostourou was involved in the preparation of the design proposal in collaboration with Rainer Hehl and Something Fantastic as a student of the ETH Zurich MAS Urban Design programme and as a participant in the workshop and conference organised by The Museum of Modern Art (MoMA) in collaboration with The Austrian Museum of Applied Arts (MAK) in Vienna. While studying at the MAS UD at ETHZ, she developed an expertise in envisioning and designing future urban scenarios for developing territories. Together with the MAS UD team she also co-authored the book Minha Casa, Nossa Cidade: Innovating Mass Housing for Social Change in Brazil which was published this year by Ruby Press, Berlin,  followed by a series of group exhibitions at Columbia GSAPP’s Studio-X and the Museu de Arte do Rio in Rio de Janeiro, and the Architecture Biennale in São Paulo.