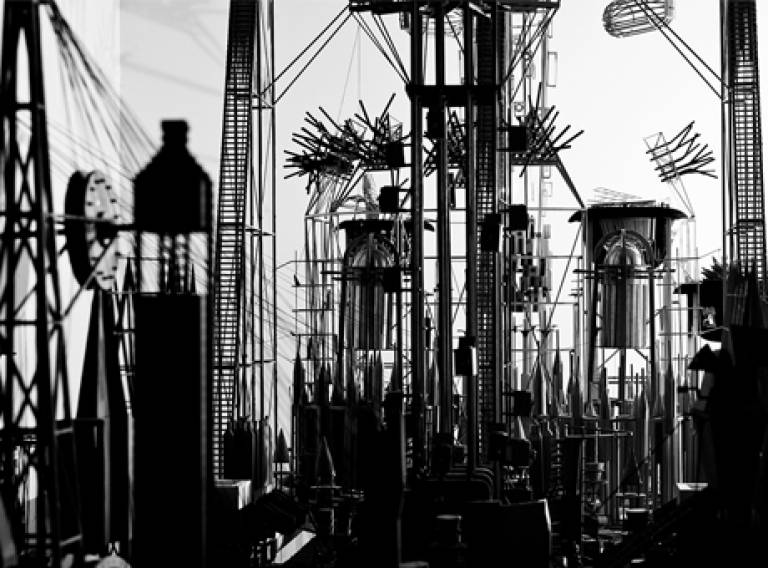 FleaFolly Architects, BSc Unit 5 tutors Thomas Hillier and Pascal Bronner, have been awarded a prestigious Jerwood Makers Open commission. The duo, who also studied at The Bartlett School of Architecture, are known for using unorthodox narratives and programmes to create original and often surreal observations.

Using the themes, characters and ideals from Mary Shelley’s Frankenstein as a narrative driver, they plan to will create a 'modern day monster' based on digital technologies, a metaphoric machine landscape that explores, interprets and manifests the challenges and opportunities that humans face in the information age. Their re-imagining of Shelley’s monster will manifest itself as a technological Tower of Babel where all of humanity’s existing and future digital information will be stored, no matter how dark, amoral or useless. The creation of this facility would hold inconceivable amounts of information turning it into an infinite electronic archive. The setting for this ‘grotesque shrine to the digital age’ will be within the barren lands of the Arctic Circle, the location of the last sighting of Shelley’s creature, where the desolate, glacial climate will be used to cool their infernal creation.

Jerwood Makers Open
Now in its fourth year, the Jerwood Makers Open offers applied artists in the early stages of their careers a unique opportunity to develop their creative ideas independently of specific commissioning structures. Open to UK residents within 10 years of graduating or setting up their practice, the programme awards five artists with bursaries to create new work. The resulting work will be exhibited at the Jerwood Space, London from 11 July to 31 August 2014, before touring the UK.