Work by Bartlett March Unit 20 Tutors, Marjan Colletti and Richard Beckett, was featured in this year's 3D Printshow held at the Business Design Centre London from 7 - 9 November 2013. The event brings together the biggest names in 3D printing technology working in the areas of in the areas of art, fashion, architecture, education, medicine, and film.

Interface/4 by Richard Beckett (pictured above) is part of an ongoing series of experiments investigating the design potential afforded by additive manufacturing for Architecture. This fourth generation prototype consists of over 100 components with 10 different structural geometries leading to the majority of the structure achieving a thickness of 1mm. 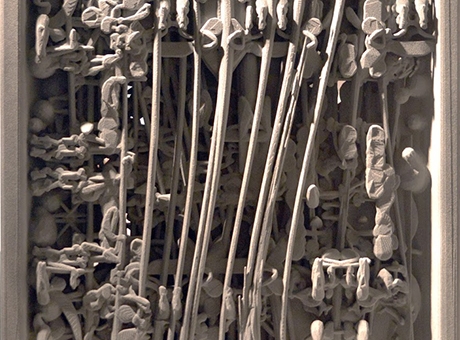 Marjan Colletti's Stereoscopic? (pictured below) aims to push 3D printing to its limits. The geometry is repeated twice for structural reasons, but also to play with the doubling-up effect known from 3D films – hence the title Stereoscopic.