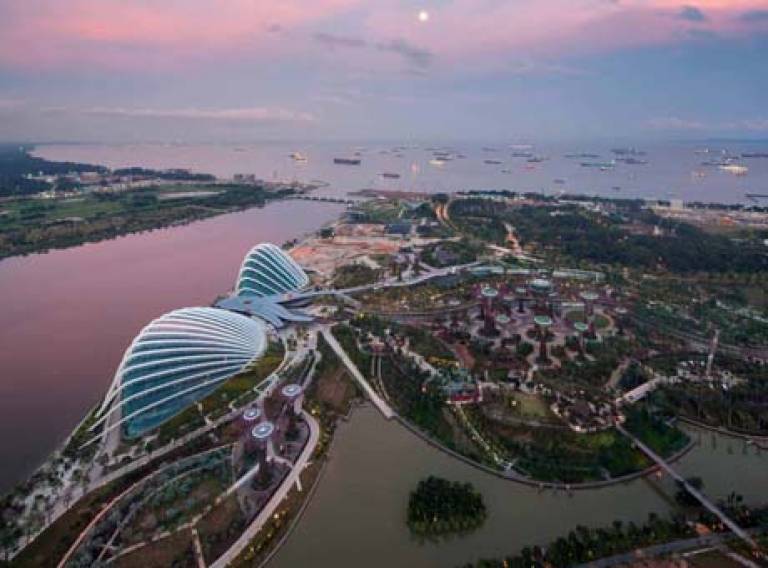 Congratulations to former Bartlett student, Matthew Potter, and his colleagues at Wilkinson Eyre Architects who recently picked-up the World Building of Year Award for 'Cooled Conservatories at Gardens by the Bay' at the World Architecture Festival in Singapore.

Displaying plants and flowers from Mediterranean and tropical regions, the two enormous steel and glass cooled conservatories are part of a £500 million landscaped park by Grant Associates, Wilkinson Eyre, Atelier One and Atelier Ten.

Matthew Potter, Associate Director at Wilkinson Eyre and project architect on the award-winning Cooled Conservatories structure, completed both his architecture degree and and diploma at The Bartlett. Below he tells us more about the project.

What were the greatest challenges in delivering the project?
The greatest challenges on the project were resolving the very onerous environmental and structural challenges without making it look like a struggle. There was huge effort invested in coordinating all of the systems (concealing them behind walls and beneath planter beds) and making the structure look as effortless as possible.

What's unique about the project?
There are lots of unique things – from the very collaborative team work that was required to achieve what I have described above, to the huge range of (reasonably) tried and tested technologies that were brought together to form a unique combination. More ‘headline’ items include the largest grid-shell in the world and the tallest indoor waterfall.

Has your time at The Bartlett influenced your work as an architect?
I think the Bartlett has undoubtedly influenced my work as an architect. Although it was the work of a number of people there is something distinctly March Architecture Unit 14 about the deployable shading system that covers both biomes – huge triangular sails that unfurl from hiding places within the ribs in response to the intensity of the sun. The building has an integrated responsive shading system within the roof...evidence of Bartlett research impact I would say?