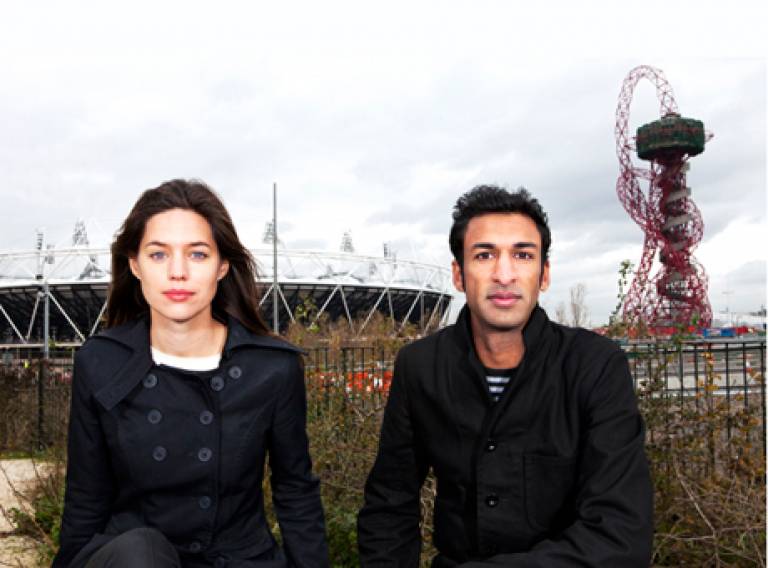 Bartlett School of Architecture graduates Pernilla Ohrstedt and Asif Khan, of the emerging architectural practice ‘Pernilla & Asif’, have designed an interactive pavilion for London’s Olympic Park that visitors will be able to ‘play’.

‘The Coca-Cola Beatbox’ will enable visitors to create their own beat for London 2012 by remixing sounds of Olympic sports captured for an anthem that is being created for Coca-Cola by Grammy award-winning producer, Mark Ronson.

“As Londoners we are really excited to be a part of the London 2012 Olympic and Paralympic Games. Coca-Cola, a truly iconic brand, has believed in our practice’s creativity and vision to represent them at London 2012, taking our unique architecture to a global audience.

“We have sought out some of the most innovative engineers in the UK to work with us to realise our vision – a ‘building with a beat’. The Coca-Cola Beatbox will be a sensory experience that fuses design, music, sport and architecture. It will be something that people have never seen or heard before!”

Pernilla Ohrstedt –  who curated the Canadian pavilion at the Venice Architecture Biennale 2010 – and Asif Khan, who won a W Hotels Designers of the Future Award 2011, met while studying architecture at the Bartlett in London. They set up their studio last year and their projects encompass creative direction and experimental architecture.

•    See more of their work at http://www.pernilla-asif.com

•    See an interview with Asif Khan in The Telegraph where he was shortlisted in the newspaper’s ‘Amazing 15.’