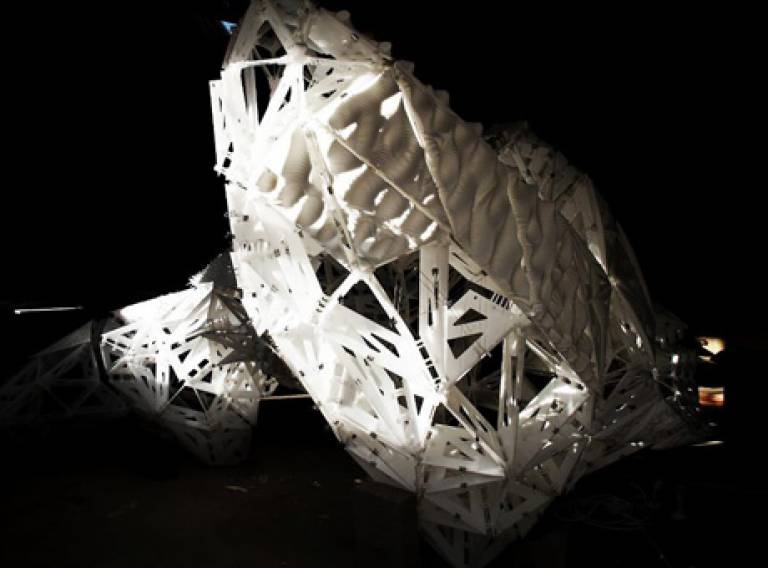 MArch GAD research cluster 2 taught by Marjan Colletti exhibits at the Haus der Architektur in Graz, together with the Academy of Arts Vienna and the TU Graz

By all means – analogue/digital experimental settings

Digital techniques and tools significantly broaden the areas of architectural thinking and acting. They influence analysis, concepts, simulation and production and thus the prospects of architecture itself. Interdependencies between analogue and digital processes lead to new conceptual and substantial solutions, the gap between thinkable and buildable ideas disappears, different spaces can be experienced.

Based on practical research and teachings of three different architecture universities, “By all means” shows various approaches on how this enhanced repertoire can be dealt with. Playful, experimental, yet also applied works illustrate the spectrum and the interchange between theory and practice of these new application areas.

Lecture: Sir Peter Cook (London), May 8, at 7 pm, HS 1, TU Graz.
In cooperation with the Institute for Architecture and Media, Master Lectures

Panel: “Should buildings grow/adapt/repair themselves? And if so, why not?” May 9, 2012, 6 pm, HDA
In cooperation with Kunsthaus Graz

Along with the exhibition a movie night curated by Diagonale Festival of Austrian Film takes place on April 19, at 7pm.