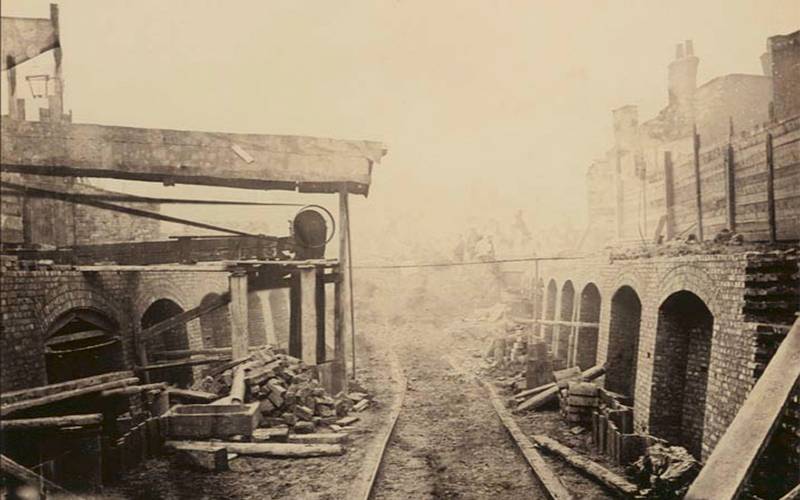 Narratives of communication and improvement in mid-nineteenth-century London

In the mid-nineteenth century, new infrastructural networks seemed to promise social change. The railway – hailed as the ‘iron missionary’ – was invested with the power to create common interests and bring the classes closer together. In the city, new and faster communication routes were identified as a means of providing improvement for all. Infrastructural development became naturalised as an agent of progress; both utopian socialism and liberal institutions adopted infrastructure as a means of spreading ‘civilisation’.

Miranda's research considers narratives of metropolitan improvement in mid-nineteenth-century London and their role in promoting the idea that new networks could bring politically neutral, conflict-free progress. She uses photographs of demolition and the construction of railways in London from the 1860s to trace the development of these ideas and to examine and challenge arguments about modernity, fragmentation, and the threat of urban destruction.

The demolition of homes for railway construction also provides a framework for analysing discussions of public interest, the place of labourers in the city, and the representation and recording of urban change. Miranda will explore how these methods of counting, mapping and recording were tools of erasure as well as subject formation and how corporate and state interpretations of the city interplayed and evolved in tandem.

Miranda Critchley is a member of the HERA-funded joint research project ‘Printing the Past: Architecture, Print Culture, and Uses of the Past in Modern Europe’. After her History BA, she worked as a researcher and completed Architectural History MA at The Bartlett in 2016. She has taught in the History Department at Queen Mary University and the History of Art Department at UCL. Her other research interests include prison architecture and the prison abolitionist movement.