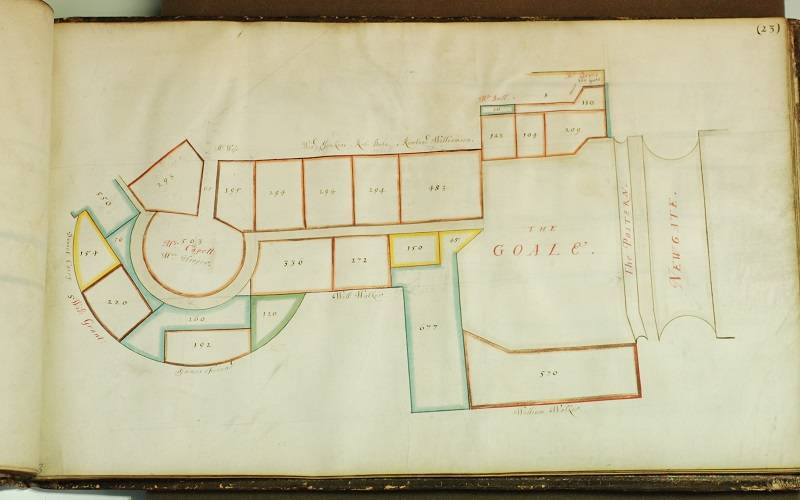 Of a Vellum Book: William Leybourn’s Survey of Encroachments upon the London Wall (1676), a chorographic study.

Ten years after the Great Fire of London, William Leybourn, City Measurer and pioneer in the techniques of surveying, made a drawing of encroachments upon the London Wall, presented as a book of Vellum at Guildhall. In commissioning their survey, the Corporation of London was motivated by economic and political priorities: to monetise the Wall by quantifying encroaching lands, identify encroachers, and extract from them monies in rent.

The Encroachment Survey is probably the most detailed surviving drawing of the Old London Wall, made at time when it was still intact as a structure, yet redundant as a fortification. Its production marked an important transition in the management of the City of London as an estate. In subsequent centuries, the Wall was systematically destroyed as land was released for other uses. By the late nineteenth century, the Wall had been almost entirely taken down. Just as the Old London Wall was being dismantled, an antiquarian value in what remained was becoming apparent, and a lineage of representations of encroachment sites survives in the form of perspective views and narrative descriptions. Writers in the Stow tradition over the fifteenth and sixteenth centuries – Stow (1598), Hatton (1708), Strype (1720), Maitland (1756) – mention the Wall in their antiquarian histories almost incidentally. In the nineteenth century, artists such as Capon, Carter, and Wykeham Archer made paintings and drawings of surviving fragments of the lost City Wall. Two forms of representation of London Wall reveal their own values in the Wall: Leybourn’s quantifying ichnographic drawing was economically motivated; antiquarian views sought to recover an occluded Wall.

Through close archival research of the Encroachment Survey, preparatory drawings, and Corporation records, my research constructs a history of the Encroachment Survey’s production: the Corporation’s motivations, Leybourn’s techniques, the antiquarian’s legacies. As a strategy of historiographic synthesis, my thesis proposes a part-to-whole dialogue between Leybourn’s synoptic drawing of the Old London Wall and the miscellany of perspective views, with reference to the Ptolemaic distinction between geographia (universal description) and chorographia (regional description), in order to propose an alternative historiography of the Old London Wall.

Matthew Poulter is an architect specialising in public buildings, adaptive reuse, heritage, and knowledge sector projects. Following his training in interior design at Duncan of Jordanstone, Dundee, Matthew completed his architectural education at University of East London, where he also received an Architectural History and Theory MA with the thesis, The Pompeii Archive, a study of the archaeologies of Foucault, Freud, and the site of Pompeii.

Matthew is a part time PhD candidate at The Bartlett School of Architecture, UCL. His PhD project is a continuation of his research interest in the role of the topographical as a mediating concept of the past, at the intersection of representational practices, disciplinary knowledge construction and the apparent recovery of the lost material artefact.