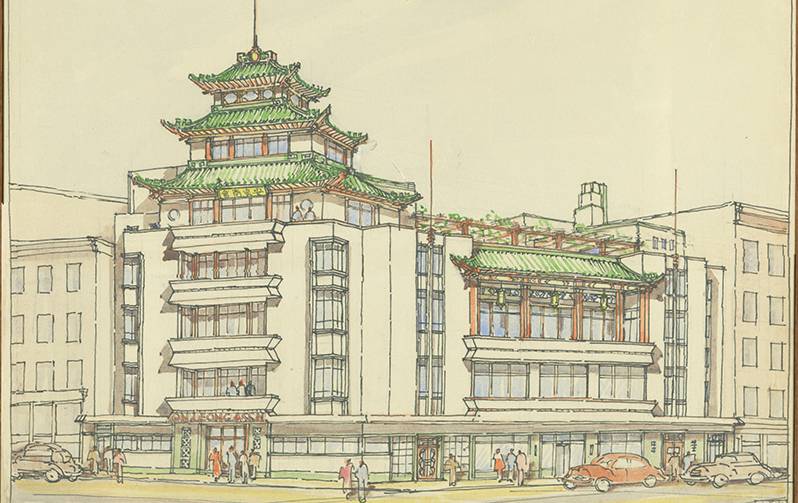 For all of the scholarly and popular coverage of Chinatown politics, society, and culture, the physical fabric of New York’s original Chinatown has received significantly less attention. This is perhaps due in part to the fact that New York’s Chinatown, unlike its transcontinental peer in San Francisco—each having held the title of largest Chinatown in the West—was never purposefully designed as a “Chinatown,” and lacks the visual cohesion common to more intentionally-planned and commodified ethnic enclaves.

After the 1906 earthquake, San Francisco’s real estate industry seized an opportunity to commodify its Chinatown by exoticising it. The entire neighborhood, leveled by the earthquake, was rebuilt according to a unified program of wholesale and intentional Orientalising. Its pagoda roofs and Orientalised typography were specifically intended to attract white tourists, the cornerstone of the local economy.

Founded by male sojourners—laborers and merchants—from Guangdong Province in Southern China, New York’s Chinatown developed very differently, more organically, and for nearly 150 years, has continuously developed and changed in response to manifold internal and external forces. From the earliest balconies tacked onto tenements-turned-associations in the 1880s, which approximated the urban commercial vernacular of the Pearl River Delta; to the full-blown temples of banking of the 1980s, a transnational hybrid urban fabric has accrued slowly, deliberately, and typically in service of the dominant local economic or political trend.

Through the lens of the Chinatown-native Chinese American architect Poy Gum Lee’s (1900-1968) life and career, my research traces the architectural and physical development of New York’s original Chinatown from the earliest known examples of Chinese vernacular building modifications; to urban renewal plans for reshaping Chinatown into a self-Orientalised Chinese theme-park in the Cold War era; and Lee’s work promoting a mid-century civic vision for Chinatown influenced by modern mainland Chinese architectural precedent.

A survey and analysis of the ongoing physical and demographic transformations of Chinatown as a result of changing immigration laws (Immigration and Nationality Act of 1965), and the influx of global capital over the past 50 years brings the topic to the present.

In 2015, she curated the exhibition Chinese Style: Rediscovering the Architecture of Poy Gum Lee, 1900-1968 (Museum of Chinese in America, New York City), which examined life and career of the first Chinese American professional architect to practice in New York’s Chinatown.

Kerri holds an Architectural History MA with a focus on historic preservation and planning from Virginia Commonwealth University, and an Ecological Planning and Design MS from the Conway School, integrating her interests in the built environment and cultural landscape.