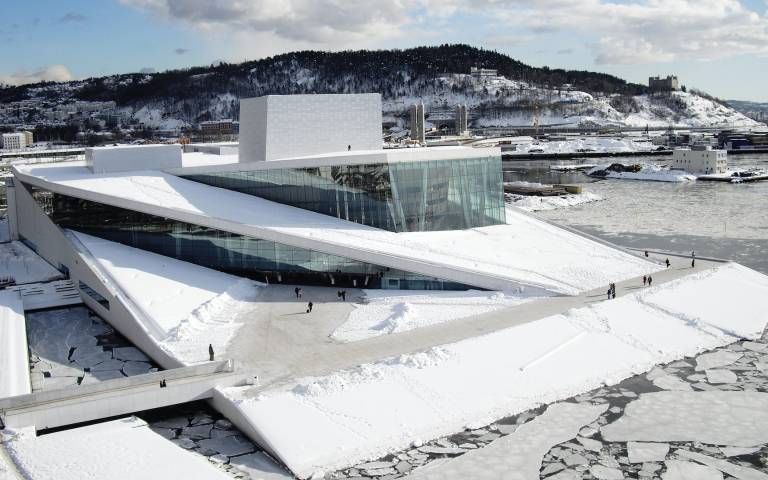 This event will be a lecture from speaker Kjetil Trædal Thorsen and host Prof Frederic Migayrou, and forms part of The Bartlett International Lectures Autumn 2022. This year, the International Lectures returns to an in-person format, with lectures taking place at the school's Bloomsbury campus, in the Christopher Ingold Auditorium, 22 Gordon Street, at 18:30 GMT on Wednesdays throughout the autumn and spring terms. Advance registration is not required unless specifically stated.

Kjetil Trædal Thorsen, co-founder of architecture and design practice Snøhetta, will take the audience on a journey through Snøhetta’s 30+ year history and philosophy, giving insight into its most defining projects; from the new library of Alexandria, Egypt, the Norwegian National Opera and Ballet to a wild reindeer pavilion by the Snøhetta mountain and the redesign of Times Square in New York.

Founded in Oslo, Norway in 1989 as an architectural and landscape collective, Snøhetta was built on the Brundtland Commission's EU report on sustainability, Our Common Future, released two years before. Since then, the practice has remained true to the approach that architecture and design can and should contribute to improving society and the environment, specifically exploring the human interaction and connection with our natural and built surroundings.

Kjetil Trædal Thorsen completed his architecture studies in Graz, Austria in 1985 and co-founded Snøhetta in Oslo in 1989. Since then, he has been instrumental in defining Snøhetta’s philosophy and growth into a transdisciplinary and global architecture and design practice, as well as major projects such as the Bibliotheca Alexandrina in Alexandria, Egypt, the Norwegian National Opera and Ballet, Le Monde Group Headquarters in Paris, Europe's first underwater restaurant and the world's northernmost energy-positive building.
For his work, he has been awarded the European Union Prize for Contemporary Architecture – Mies van der Rohe Award, the Aga Khan Award for Architecture and the Global Award for Sustainable Architecture, amongst others.

Kjetil Trædal Thorsen is a frequent lecturer, and from 2004 to 2008, he was Professor of Architecture at the Institute of Experimental Architecture at the University of Innsbruck, Austria. In addition, he often acts as a jury member for international design and architecture competitions and awards, such as the Obel Award and Zumtobel Group Award.