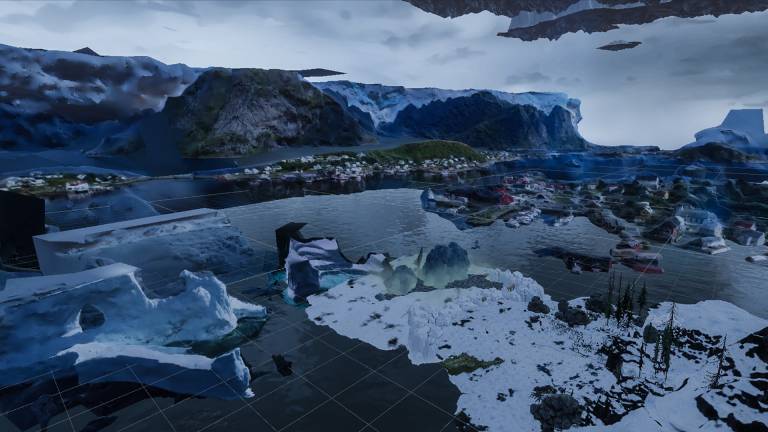 Déborah López and Hadin Charbel curate a seminar that spotlights authors and practices whose works link technology's diverse roles across human and non-human scales in the current and future climate regime, exploring the possibility, and perhaps the inevitability, of encoding ethics.

The effects of climate change have become increasingly legible with implications across multiple geographical scales and regions. Read as ecological and environmental transformations, accelerated transitional states are unfolding consequences and prompting responses within social, political, economic, human and non-human spheres alike. For instance, the term ‘cli-migration’ was coined by an Alaskan human rights lawyer in 2008 to describe the permanent, forced relocation of communities due to climate change. That same year Ecuador introduced articles 10 and 71-74 to their constitution that explain the Rights of Nature as both a definition and the means to its legal and practical application.

While climate change can be described as a ‘hyper-object’ (Morton 2013) whose effects are generally conceived to exist at an incomprehensible scale, its causes are grounded in the accumulation of various actions that are linked with the extractivist and capitalist logics resulting in a positive feedback loop– more resource extraction leads to more consumption and vice versa. Architecture is indeed one facet among an ecosystem of production and consumer based economies that has inextricably linked resources to commodities. Further to this, the use of territorialising technologies and mediums (such as satellite imagery and land surveys) is now coupled with artificial intelligence such as machine learning, optimization algorithms and sensory devices, increasing the efficiency of all aspects of the supply chain, from prospecting to extraction and transport. It would seem that technology's inevitable end is towards colonisation.

This has in turn drawn the attention of some to investigate alternative modes of land and resource management. Meanwhile, contemporary trends in circular economies have begun questioning and testing the viability of re-utilising materials and rethinking logistical processes. Parallel to this, relatively recent technological trends that are predicated on decentralised protocols such as blockchain inherently possess political ideologies whilst exhibiting practical implications. Although technology tends to be presented as generic, the aforementioned hints at the possibility, and perhaps the inevitability, of encoding ethics.

This session will feature the following speakers for presentations followed by roundtable discussion:

Deborah Lopez and Hadin Charbel are architects and founders of Pareid, an interdisciplinary design and research studio. Their works adopt approaches from various fields and contexts, addressing topics related to climate, ecology, human perception, machine sentience, and their capacity for altering current modes of existence through imminent fictions (IF).

Deborah completed her second Master’s in Architecture at Obuchi Laboratory at the University of Tokyo as a Monbukagakusho scholar (MEXT) from 2014 to 2018, and received a Bachelor of Arts and Master’s of Architecture from the European University of Madrid. Hadin was awarded the Monbukagakusho scholarship (MEXT) between 2014-2017 and received a Master in Engineering in the Field of Architecture from the University of Tokyo. He received his Architectural Studies BA from UCLA in 2012. Their works have been exhibited at the Venice Biennale, the Seoul Biennale, and Japanese Junction and they have published articles at various conferences such as ACADIA, Technarte, and COCA.

They are both lecturers at The Bartlett in the B-Pro programme where they run Research Cluster 1 in Architectural Design MArch. The research cluster, titled 'Monumental Wastelands', focuses on cli-migration and autonomous ecologies, using methods of ‘decoding’ and ‘recoding’ through climate fiction (Cli-Fi).

About The B-Pro Open Seminar

The B-Pro Open Seminar of Prospectives invites a diverse range of thinkers and practitioners from across the world. The Open Seminar will support the development of articles for Issue 03 of the Prospectives Journal in Summer 2022.

All B–Pro students and staff are advised and encouraged to attend.