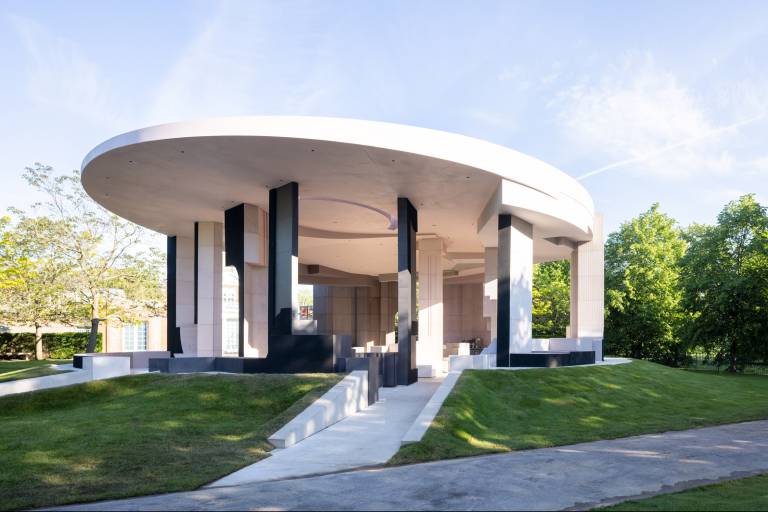 Professor Lesley Lokko has been invited to present the Valedictory Lecture for Part 3 Architecture (ARB/RIBA).

Guests from the Future

The Valedictory lecture traditionally closes the summer term of the Part 3 Architecture (ARB/RIBA) programme and is delivered by a guest speaker on a topic of their choice, relating to current societal, architectural or professional themes.

In 1945, in what has been described as ‘the most extraordinary encounter in the history of 20th century literature’, the Russian poet Anna Akhmatova met with Isaiah Berlin, then a young officer in the British Embassy in Moscow. Not much is known about the encounter between the 56-year-old poetess and the 36-year-old philosopher. The two sat down at nine in the evening and talked for twelve hours straight. After he left, she wrote a stanza in a poem she was working on, in which she described him as ‘a man not yet appeared…strayed from the future.’

Drawing on the experience of teaching and leading schools of architecture on three continents and in very different cultural contexts over the past thirty years, this lecture reflects on the very special and yet profoundly complex role that architects play in making space and place in increasingly diverse and often divergent contexts. The past year has been one of the most challenging in living memory, but it is also one of the most significant in terms of its potential for change.

Professor Lesley Lokko trained as an architect at The Bartlett School of Architecture and holds a PhD in Architecture from the school. She is the founder and director of the African Futures Institute, an independent postgraduate school of architecture and public events platform in Accra, Ghana, and a Visiting Professor at The Cooper Union, University of Virginia and The Bartlett School of Architecture. She was the founder and director of the Graduate School of Architecture at the University of Johannesburg from 2014—2019. She is the editor of 'White Papers, Black Marks: Race, Culture, Architecture' (University of Minnesota Press, 2000), and editor-in-chief of FOLIO: Journal of Contemporary African Architecture. She is also a series editor of the Design Research in Architecture (UCL Press), together with founders Jonathan Hill and Murray Fraser. In 2004, she made the successful transition from academic to novelist with the publication of her first novel, 'Sundowners' (Orion 2004), a UK-Guardian top forty best-seller, followed by eleven further bestsellers which have been translated into fifteen languages.

She has lectured and published widely on the subject of race, identity and architecture, and has served on many international juries and awards over the past decade, including the Aga Khan Award for Architecture, ArchiPrix, the RIBA President’s Medals, ArchMarathon and the Venice Architecture Biennale. She is the recipient of the 2020 RIBA Annie Spink Award for Excellence in Architectural Education and the 2021 AR’s Ada Louise Huxtable Award for Contribution to Architecture.