No Such Place As Away: Creative Ways to Deal With Waste - Bartlett International Lecture Series 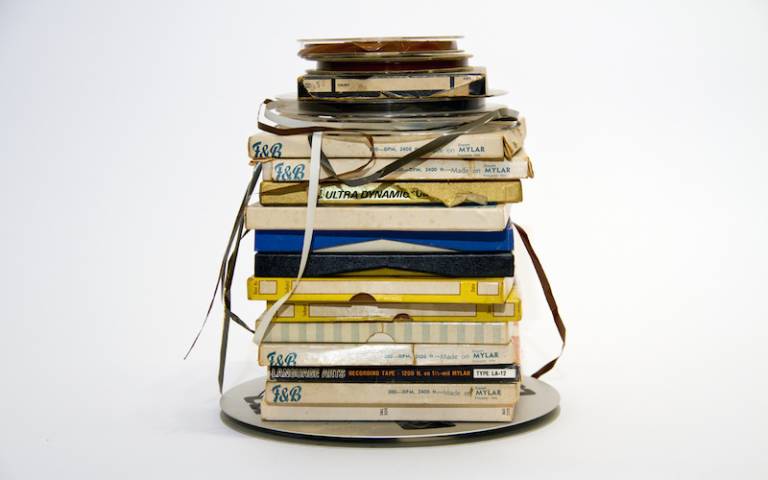 Streamed live on The Bartlett School of Architecture's YouTube channel, this event will be a discussion between co-hosts Frances Anderton and Heba Mohsen, and speaker Julia Christensen.

The average person throws away around four pounds of trash daily. Except that there is no such place as "away." Everything has to go somewhere. There is an end-of-life cost to everything. “Away” can mean storm drains, oceans, the stomachs of marine animals, a giant floating island of trash in the middle of the Pacific Ocean, and the landfill.

Designers are waking up to the need to change this picture and create products and buildings that can be recycled, repurposed, biodegrade -- or not exist at all.

Frances Anderton spoke to many of them for a recent radio series called Wasted. She met scientists genetically modifying plants to capture carbon from the atmosphere; formerly-incarcerated individuals trained to recycle computers; people fighting for their right to repair their own stuff, and an artist who is creating a conceptual space rocket flying light years away, to raise consciousness about e-waste.

Frances Anderton and Julia Christensen will share stories from the frontiers of waste.

Frances Anderton covers Los Angeles design and architecture for print and radio. She is currently writing a book, Common Ground: Multifamily Housing in Los Angeles, for Angel City Press. She recently completed the production of Wasted: Neat Solutions to the Dirty Problem of Waste, airing weekly on the daily show Greater LA, on KCRW public radio station in Los Angeles. For many years she hosted KCRW’s DnA: Design and Architecture radio show; prior to that she produced To The Point, and Which Way, LA?, hosted by Warren Olney, also for KCRW. Past series for DnA include Bridges and Walls, a series about the barriers and connections–both metaphorical and physical–shaping life in California today, and This is Home in LA: From the Tent to the Gigamansion (and Everything In Between.)

Anderton also works with Helms Design Center on programming talks and events. She has curated exhibitions, including Sink Or Swim: Designing For a Sea Change, a critically received exhibition about resilient architecture, shown in 2015 at the Annenberg Space for Photography. Anderton also produces independent podcasts; they include Desert X and Rodeo Drive: The Podcast. She has served as correspondent for the New York Times and Dwell magazine. Her books include Grand Illusion: A Story of Ambition, and its Limits, on LA’s Bunker Hill, based on a studio she co- taught with Frank Gehry and partners at USC School of Architecture.

Honors include the Esther McCoy 2010 Award for her work in educating the public about architecture and urbanism from USC School of Architecture’s Architectural Guild; she was SCI-Arc’s “Honored Guest” at its 2018 Main Event and received the 2020 ICON Award from the Los Angeles Design Festival.

Julia Christensen (born 1976, St. Louis) is a multidisciplinary artist who explores systems of technology, consumerism, landscape, and obsolescence. Her work has been exhibited internationally at venues such as the Carnegie Museum of Art, Pittsburgh; Contemporary Art Center, Thessaloniki, Greece; Eyebeam, New York; Los Angeles County Museum of Art, Los Angeles; Pori Art Museum, Pori, Finland; Ronald Feldman Fine Arts, New York; Shrine Empire Gallery, New Delhi; and the Walker Art Center, Minneapolis. The author of Big Box Reuse (MIT Press, 2008) and Upgrade Available (Dancing Foxes Press, 2020), she has also written for magazines including Cabinet, Orion, and Print. She is associate professor of integrated media and chair of the Studio Art department at Oberlin College, where she has additionally served on the faculties of the Environmental Studies program and the TIMARA (Technology in Music and Related Arts) department in the Oberlin Conservatory of Music. Christensen has received support from Creative Capital, New York State Council on the Arts, Ohio Arts Council, and Turbulence, and has had residencies at the MacDowell Colony, Peterborough, New Hampshire; Wexner Center for the Arts Film/Video Studio, Columbus, Ohio; and the Experimental Television Center, Owego, New York. In 2017 she was awarded the LACMA Art + Tech Lab fellowship, and in 2018 she was named a Guggenheim Fellow.