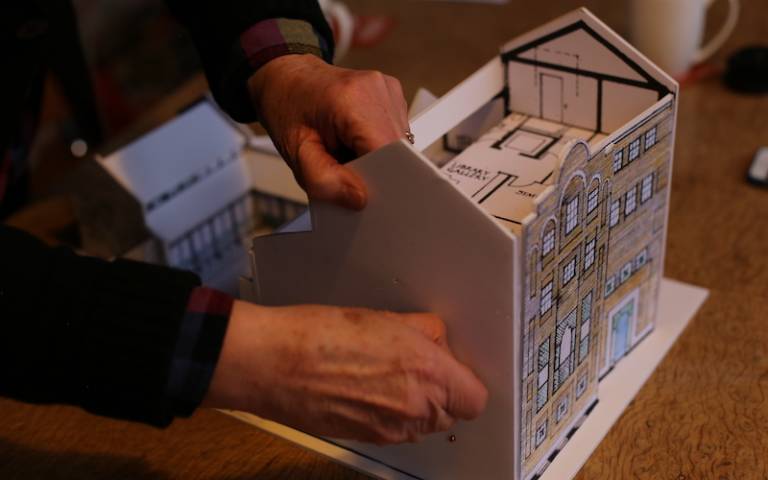 Streamed live on The Bartlett School of Architecture's YouTube channel, this event will be a discussion between co-hosts Maria Venegas Raba and Jos Boys, and speakers Torange Khonsari, Jenny Richards, Sophie Hope and Lesley Lokko.

In the 1980s, the London-based feminist architects’ practice Matrix was one of the first worldwide to bring issues of gender centre-stage to the design of the built environment. Taking this women-led and collaborative platform as a starting point, our discussions will explore some of the threads that interweave through radical and feminist design practices across generations and places, to open up different ways of working towards more inclusionary and equal practices. These threads include:

Matrix’s impact is still being felt by more recent generations of students and practitioners keen to find alternatives to the Starchitects system. So we ask, what do radical and feminist architectures look like in today’s world?

Torange Khonsari is Co-Founder and Director of the urbanism, public art and architecture practice Public Works since 2004, an inter-disciplinary practice working on co-production methods in performative art, architecture, urbanism and props for events. Her strategic design practice focuses on transformational design, design as form of inquiry and design intervention as forms of new imaginary. Her projects directly impact public space, working with local organisations, communities, government bodies and stakeholders. Torange has had 21 years in academic teaching in architecture and design. She wrote and is the course leader for Design for Cultural Commons MA at London Metropolitan University, and recently delivered a TEDx talk on Harnessing the power of Civic Commons. She was a consultant on the five-year framework on the Mayor of London’s Specialist Assistant Team for community engagement in regeneration.

Maria Venegas Raba  is an architectural historian and researcher working with photography, film, text-based performances and experimental publications to address questions of how we access the past. She is currently completing a PhD at the Bartlett exploring transnational histories of Latin-American modernist architecture in spaces of mediation. Her doctoral research sits in the intersection between the printed matter and the built environment, where she investigates the complexities of memory, fact and fiction, and the possibilities of locating archival absences to re-imagine alternative histories of the past. She is a co-founder of the Bartlett Decolonial Reading Group, an intersectional collective that engages with questions on power, knowledge(s) circulation, legitimation practices, and the intersection between colonial legacies and spaces of resistance through workshops, seminars and other sites for dissensus.

Manual Labours is a research project, begun in 2013, that explores physical and emotional relationships to work, initiated by Jenny Richards and Sophie Hope. Their project reconsiders current time-based structures of work (when does work start and end?) and reasserts the significance of the physical (manual) aspect of immaterial, affective and emotional labour. Jenny is a freelance curator and writer based in London and Stockholm whose research focuses on the politics of collaborative practices.  Sophie undertakes practice-based research focuses on the relationships between art and society, including as an independent curator, a writer and an evaluator of public and socially engaged art. She is currently a full-time academic in the Film, Media and Cultural Studies Department at Birkbeck, University of London.

Lesley Lokko has as an international reputation as an architect, academic and best-selling novelist. In 2014 she founded the Graduate School of Architecture (GSA) at the University of Johannesburg, the only school in Africa focusing on post-graduate architecture education and the first one designed around the unit system way of teaching. From 2019 to 2020 she was Dean of the Bernard and Anne Spitzer School of Architecture City College of New York. She resigned from CCNY to start the African Futures Institute, an independent postgraduate school of architecture and events platform in Accra, Ghana, which is currently under construction.  She has lectured and published widely on the subject of race, identity and architecture, and has served on many international juries and awards over the past decade, including the Aga Khan Award for Architecture, ArchiPrix, the RIBA President’s Medals, Archmarathon and the Venice Biennale.

Jos Boys leads the Learning Environments MSc at The Bartlett, UCL. She was a founding member of Matrix Feminist Design Collective in the 1980s, and since then has been involved in several alternative architectural platforms, including takingplace and The DisOrdinary Architecture Project.