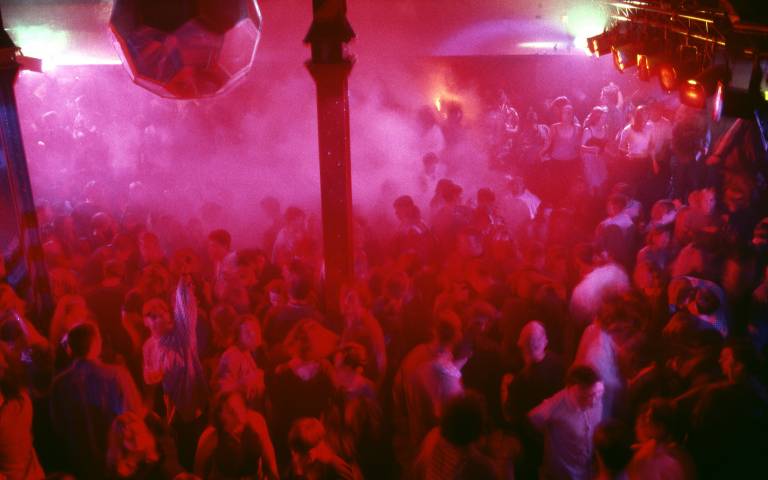 Streamed live on The Bartlett School of Architecture's YouTube channel, this event will be a discussion between co-hosts Lo Marshall and Ben Campkin and speakers Catharine Rossi and Mykaell Riley.

This event will focus on the nightclub and its associated audiences and cultures, and the ways that clubs and music venues generate particular forms of social infrastructure. The speakers will discuss how nightclubs, and the scenes they foster, are shaped by architecture and urban processes. Do we value night venues enough, as social and cultural infrastructure that supports otherwise marginalised groups? What possibilities are opened by thinking architecture through the night, and through the typologies of clubs and related venues?

The speakers and hosts will share their work curating the social, cultural and architectural histories of night-time venues. They will cover nightclub design and heritage (Catharine Rossi); Black British music and the heritage of Jamaican music in Britain (Mykaell Riley); and night-time venues associated with LGBTQ+ populations (Ben Campkin and Lo Marshall).

During the lecture, the panel will ask the audience: "If you could go dancing tonight, which club would you go to and which track would you request?" Responses will be collated in a global playlist to share with the school.

Dr Catharine Rossi is an Associate Professor in Design History at Kingston School of Art. Her research interests range from post-war Italian design to the relationship between design and craft past and present, and the design history of nightclubs. Publications include Designing Craft in Italy: from Postwar to Postmodernism (MUP, 2015), co-editing with Alex Coles The Italian Avant-Garde (Sternberg Press, 2013) and the forthcoming Post-Craft (Sternberg Press). Curatorial projects include Space Electronic: Then and Now (Venice Architecture Biennale, 2014) and the co-curated Radical Disco: Architecture and Nightlife in Italy, 1965 - 1975 (ICA, 2015 - 2016). Most recently she co-curated Night Fever: Designing Club Culture 1960 to Today, a touring exhibition which opened at Vitra Design Museum in 2018 and which next opens at V&A Dundee in 2021.

Mykaell Riley’s career started as a founder member of the British roots Reggae band Steel Pulse who would go on to receive a Grammy. As a professional writer / producer, his work encompassed TV, Film, resulting in eleven UK top twenty positions, and three UK number ones. He also formed The Reggae Philharmonic Orchestra, Britain's first black pop string section. He is a senior lecturer at the University of Westminster, where in 2012 he established the Black Music Research Unit. In 2017 he championed the Grime Report in partnership with Ticketmaster, which resulted in a change in government legislation. In 2018 he staged the UK’s largest photographic exhibit on the impact of Jamaican music in Britain. In 2019 he released ‘Bass Culture’ the film mapping Soundsystem culture to Grime. Mykaell now sits on the academic board for the Museum of London, HKW Berlin and is trustee for Tavaziva Dance and Finding. Rhythms.

Image: Inside the Haçienda nightclub, Manchester, early 1980s. Capturing the atmosphere of a nightclub is a key curatorial and heritage challenge for exhibitions on this area. Credit: Peter Walsh / PYMCA