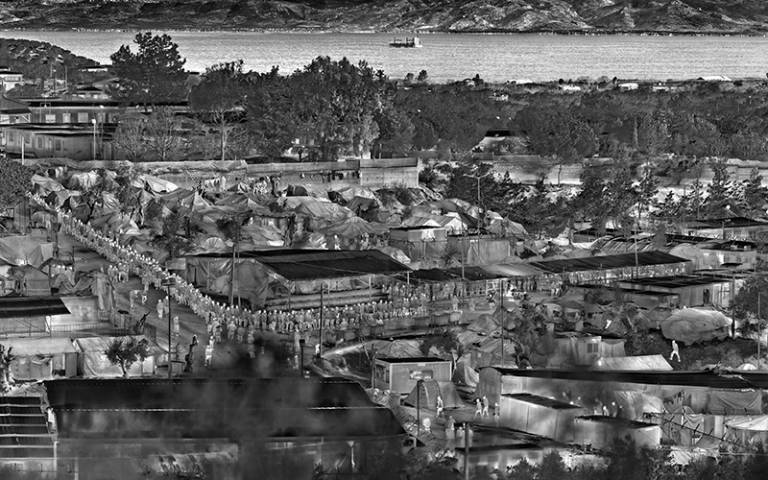 Join photographer Richard Mosse for a discussion about his latest publication, The Castle.

The Irish photographer Richard Mosse presents recent work including the series Heat Maps, made using a military camera that is classified as a weapon under international law.

The hi-tech surveillance device, designed to detect body heat from a distance of over 30km, was used by Richard to track the journeys of refugees from the Middle East and North Africa.  The result is a series of large-scale prints that reconfigures the refugee crisis as a spectral, almost sci-fi drama of human endurance and survival. He has also produced an acclaimed film, Incoming from the result of the project.

The Castle is a meticulous documentation of refugee camps and staging sites located across migration routes from the Middle East and Central Asia into the European Union via Turkey. The Castle draws attention to the provisional architecture of refugee camps – the barbed fences, security gates, portaloos, loudspeakers, food queues, tents and temporary shelters. The sequence of the book, which is divided into 28 sites, presents panoramic and close-up images underling the various ways in which each camp interrelates with, or is divorced from, adjacent citizen infrastructure – marginalised, concealed, overlooked, integrated, dispersed, regulated, militarised.

The publication does not attempt to represent the refugee crisis in a seemingly “transparent” or objective way. Instead, it prompts question about the “visibility” of refugees and the erosion of their human rights. Richard's images, which read heat as both metaphor and index, ask us to think about the current conditions of refugees through ideas of hypothermia, exposure, climate change, biopolitics, and mortality.

Following the presentation Richard will be in discussion with James O’Leary, Programme Director - Situated Practice MA, The Bartlett School of Architecture, UCL.

The Castle is published by Mack books and will be available to purchase after the event.

Richard Mosse is an Irish conceptual documentary photographer. He was born in 1980 in Ireland and is based in New York. In 2017 he won the Prix Pictet – the prestigious global award in photography and sustainability – for his project Heat Maps. Richard earned a Postgraduate Diploma in Fine Art from Goldsmiths, London in 2005 and an MFA in Photography from Yale School of Art in 2008. He represented Ireland in the 55th Venice Biennale with The Enclave in 2013. He is a recipient of the Deutsche Börse Photography Prize 2014, Yale’s Poynter Fellowship in Journalism, the B3 Award at the Frankfurt Biennial, a Guggenheim Fellowship, a Pulitzer Center on Crisis Reporting grant, and a Leonore Annenberg Fellowship. Richard has exhibited in solo and group exhibitions internationally at venues such as Louisiana Museum of Modern Art, Humlebæk; FOAM, Amsterdam; National Gallery of Victoria, Melbourne; Reykjavík Art Museum, Iceland; Irish Museum of Modern Art, Ireland; and Akademie der Künste, Berlin.

For more detailed information about how to get to UCL at Here East please use our travel guide.