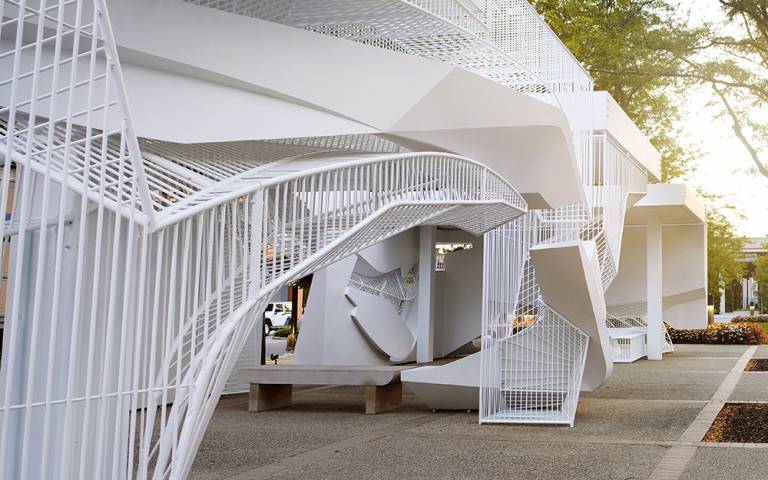 The Bartlett School of Architecture
architecture.comms@ucl.ac.uk
02031087337

In this lecture, Jenny Wu will discuss the evolution of the design work of the Los Angeles based architecture firm, Oyler Wu Collaborative, which she founded with Dwayne Oyler in 2004. Beginning with the idea of line as space, their work has moved from small scale installations to large scale buildings. By looking at a range of projects, Dwayne and Jenny will cover their trajectory from purely line-driven projects to those that consider dialogues between line, surface, and volume.

Jenny is a partner at the Los Angeles based architecture firm, Oyler Wu Collaborative, which she founded in 2004 with Dwayne Oyler.  The firm is recognised for its experimentation in design, material research, and fabrication, and was the winner of 2013 Design Vanguard Award from Architectural Record, 2017 The J. Irwin and Xenia S. Miller Prize recipient, and most recently the 2018 ACADIA Digital Practice Award of Excellence.

Their recent completed projects include the competition winning project, The Exchange, for Exhibit Columbus, a 3D printing Culinary Lab in Los Angeles for 3D Systems, and The Monarch Tower, a 16 story residential high rise in Taipei, Taiwan.  The office was recently selected by the City of Los Angeles to design the LA River Bikeway and Greenway project, a large scale public project for the City of LA.  In addition to her architectural practice, she also founded LACE by Jenny Wu, a line of 3D printed luxury jewellery line in 2014.

Jenny received her Bachelor of Arts from Columbia University and Masters of Architecture from Harvard Graduate School of Design.  She is a member of the design faculty at the Southern California Institute of Architecture.