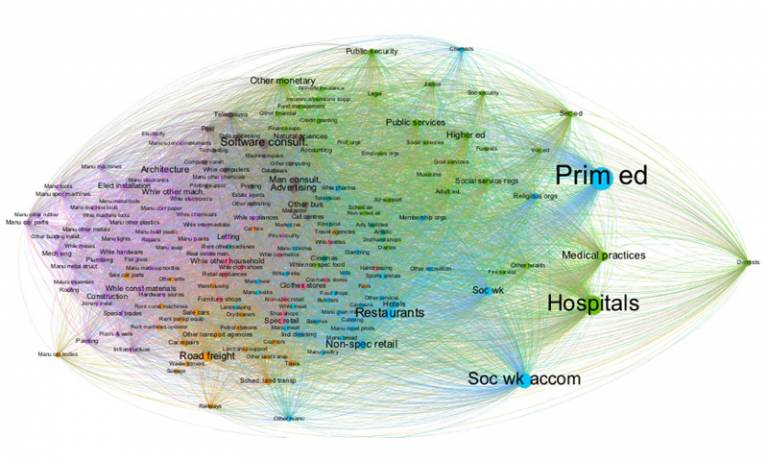 Does Spatial Configuration Influence the Operation of Agglomeration Economies?
The case of Manchester

The proposition that urban economies function as agglomerations of industries, characterised by relations of proximity, was first proposed by Alfred Marshall in 1890. It is the focus of renewed scholarly attention today, as cities are increasingly understood to possess spatial qualities that predispose them to act as drivers of growth and innovation. However, the concept of agglomeration itself remains poorly understood.

This presentation will feature the first results of Francesca PhD research, which assesses whether the concept remains helpful for understanding the evolving economy of Manchester in the UK. In the process it will draw on a number of theoretical disciplines, including network theory, complexity theory and evolutionary economic geography, to further unpack the ‘black box’ (Duranton and Puga, 2003) of agglomeration economics.

Francesca’s PhD is seeking to understand whether it is only the size of cities that matters in enhancing productivity or whether the spatial configuration of Manchester has influenced the operation of sharing, learning and matching economies over its history. The research so far has also included the piloting of an ‘industry space’ model (Neffke and Henning, 2009) for Manchester, which maps the existence of related economic variety in the city. Overall it is suggested that agglomeration economies are constituted by a series of complex and interrelated networks, as opposed to being characterised simply by economic or spatial ‘mass’.

The research seminar of the Space Syntax Laboratory is a fortnightly seminar to showcase latest research conducted by PhD students, researchers and academics at the Lab. This includes upgrade seminars of PhD students of the Architectural Space and Computation programme, but also researchers sharing findings and ideas, showing work in progress and ‘thinking aloud’. The seminars are targeted at an academic audience, but all interested parties are welcome.