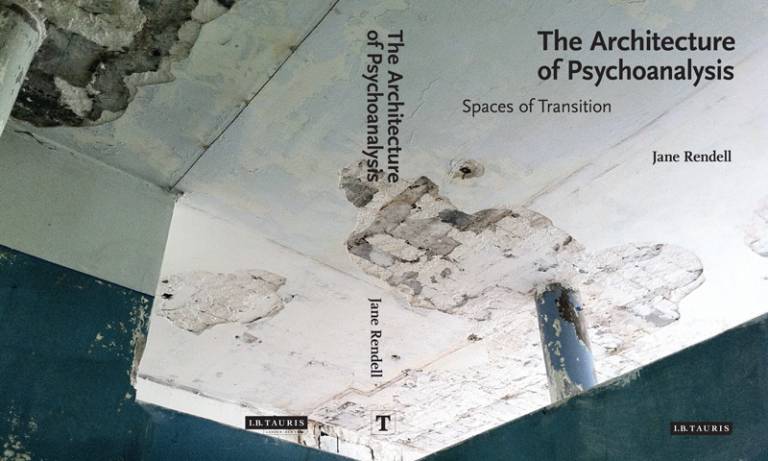 Join author Jane Rendell for the book launch of ‘The Architecture of Psychoanalysis: Spaces of Transition’, published with IB Tauris. The author will be in discussion with geographer Steve Pile, writer Anna Minton and architect Lorens Holm, chaired by curator/editor/writer Gareth Evans, on themes raised in the book concerning emotion, housing, politics and place.

‘In this thought-provoking book, Jane Rendell explores how architectural space registers in psychoanalysis. She investigates both the inherently spatial vocabulary of psychoanalysis and ideas around the physical ‘setting’ of the psychoanalytic encounter, with reference to Sigmund Freud, D.W. Winnicott and Andre Green. Building on the innovative writing methods employed in Art and Architecture and Site-Writing, she also addresses the concept of architecture as ‘social condenser’, a Russian constructivist notion that connects material space and community relations. Tracing this idea’s progress from 1920s Moscow to 1950s Britain, Rendell shows how interior and exterior meet in both psychoanalysis and architectural practice. Illuminating a novel field of interdisciplinary enquiry, this book breathes fresh life into notions of social space.’ IB Tauris

About the speakers and chair

Gareth Evans is a writer, editor, presenter, producer and Film Curator at the Whitechapel Gallery London. He conceived and co-curated Utopia 2016 at Somerset House, and is a co-curator of the Estuary Festival and Whitstable Biennale. Recent film Executive Producer Credits include Erase and Forget (Andrea Luka Zimmerman, Berlinale, 2017) and By Our Selves (Andrew Kotting, 2015).

Lorens Holm is Reader in Architecture at the University of Dundee, where he runs the Rooms+Cities design research unit and is Director of the Geddes Institute for Urban Research. His teaching/research focuses on the thought/space threads that link architecture to philosophy, history, psychoanalysis, and machines. Publications include Brunelleschi Lacan Le Corbusier: architecture space and the construction of subjectivity (Routledge 2010) and, with John Hendrix, Architecture and the Unconscious (Routledge 2016). He is working on a draft of Lacan for Architects (Routledge).

Anna Minton is a writer, journalist and academic. She is the author of Ground Control: Fear and Happiness in the 21st Century City, published by Penguin in 2009 and Big Capital: Who is London For? which will be published by Penguin in June 2017. She is Reader in Architecture at the University of East London where she is Programme Leader of the MRes Architecture: Reading the Neoliberal City. Between 2011-2013 she was the 1851 Royal Commission for the Great Exhibition Fellow in the Built Environment. She is a regular contributor to The Guardian and Architectural Review and appears regularly on television and radio. www.annaminton.com

Steve Pile teaches Geography at The Open University. He has published on issues concerning place and the politics of identity. Steve is author of Real Cities (2005) and The Body and The City (1996), which both develop a psychoanalytic approach to geography. It is through these projects that he became interested in alternative spiritualities and their relationship to contemporary modernity. His many collaborative projects include the recent collection, Psychoanalytic Geographies, edited with Paul Kingsbury. He is currently working on early Freudian psychoanalysis and geographies of the body.

Jane Rendell trained and practiced as an architectural designer, before studying for her MSc and PhD in architectural history. Her transdisciplinary writing, through which she initiated ‘critical spatial practice’ and ‘site-writing’, crosses architecture, art, feminism, history and psychoanalysis. She is author of Silver (2017), Site-Writing (2010), Art and Architecture (2006), and The Pursuit of Pleasure (2002). She is Director of History and Theory at the Bartlett, leads the Bartlett’s Ethics Commission, and with James O’Leary, is launching the MA Situated Practice in September 2017.

“Dizzying in its scope and ambition. Jane Rendell has pioneered a new field of inter disciplinary study and in the process issued a call to arms in uncertain times, based on the uncovering of the politically unconscious in architecture. A vital book.

Anna Minton, author of Ground Control: Fear and Happiness in the 21st Century City, and Reader in Architecture at the University of East London

“In the calculated destruction of tower blocks, the malignant neglect of communal housing and the greedy manipulation of the housing market, Jane Rendell witnesses both the losses of architecture and the death throes of an idea - the idea that architecture is a social good. Jane refuses to become melancholic or defeated. Instead, she seeks the resources that might allow us to generate spaces and times that can move us forwards. This book is a recognition of losses to be found in rubble and ruin of our cities, but to serve a more hopeful architecture, tuned to the needs of individuals, of communities, and of wider society. The Architecture of Psychoanalysis is a beautiful braiding of provocative architectural criticism and evocative psychoanalytic insight. This book revels in the possibilities, both political and personal, that this braiding offers.

Image: Book cover for ‘The Architecture of Psychoanalysis: Spaces of Transition’ by Jane Rendell