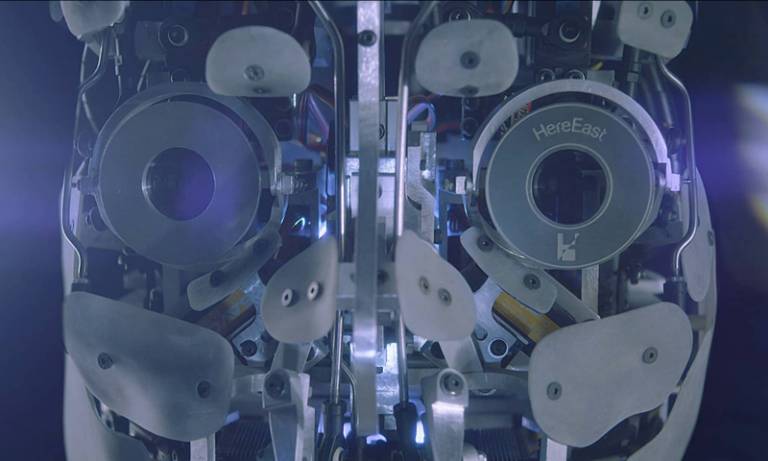 PIxLS is the public lecture series from the Bartlett's new Master's programme, MArch Design for Performance and Interaction

This gathering will explore the intersection between puppetry and robotics, with talks from artists and researchers working between these fields. Our speakers are puppeteer Stephen Mottram, Elizabeth Jochum, co-founder of the Robot Culture and Aesthetics group at Aalborg University, Rich Walker, the Managing Director of Shadow Robot Company, David McGoran, creative director of Rusty Squid and Ruairi Glynn, Director of the Interactive Architecture Lab at the Bartlett.

For thirty years, Stephen has been touring the globe with marionette shows for adult audiences. Best known of these are In Suspension, The Seas of Organillo and The Seed Carriers. He also worked on films like The Little Shop of Horrors and Strings. His most recent work The Parachute, is based on the point light research of Gunnar Johansson and explores how minimal movements by small groups of lights can convey complex information to an audience. Trained in London and Budapest as a mime, he has a deep interest in communication through movement and spends a lot of time nowadays teaching.

Elizabeth Jochum is an assistant professor of Art and Technology at Aalborg University. Her research focuses on the intersection of robotics, art, and performance. She is the co-founder of the Robot Culture and Aesthetics (ROCA), a member of Aalborg U Robotics, and serves on the editorial board of Global Performance Studies. Her publications appear in Robots and Art, Controls and Art, Robotics and Autonomous Systems, and the International Journal of Social Robotics.

Rich Walker is the Managing Director of Shadow Robot Company. He has a BA in Mathematics and a Diploma in Computer Science from Cambridge University. He leads the team at Shadow who are developing new robots and new applications for robotics. He is active in developing and implementing European (FP7 and now Horizon 2020) and Innovate UK projects. Rich is on the Innovate UK “Robotics and Autonomous Systems” SIG Advisory Board, as well as several EPSRC robotics advisory boards and management committees. He is also one of the three SME Directors of the EuRobotics association

David MGoran is creative director of Rusty Squid, a Bristol based studio exploring primal emotions in embodied machines. He is a graduate of the National Theatre School of Canada and has a Bsc in Robotics from the University of the West of England. David is a classically trained dancer and has intensively studied movement analysis, physical theatre and puppetry. David's consultancy and lecturing work addresses the space where the moving arts, such as animatronics and puppetry, intersect with science and technology.

Ruairi Glynn is Director of the Interactive Architecture Lab at the Bartlett, University College London. Alongside academic research he practices as an installation artist recently exhibiting at the Centre Pompidou Paris, National Art Museum of China Beijing and Tate Modern London. His interactive installations reflect on rapid developments in robotic technologies examining the emerging aesthetics of animate behaviour in art, architecture and design.