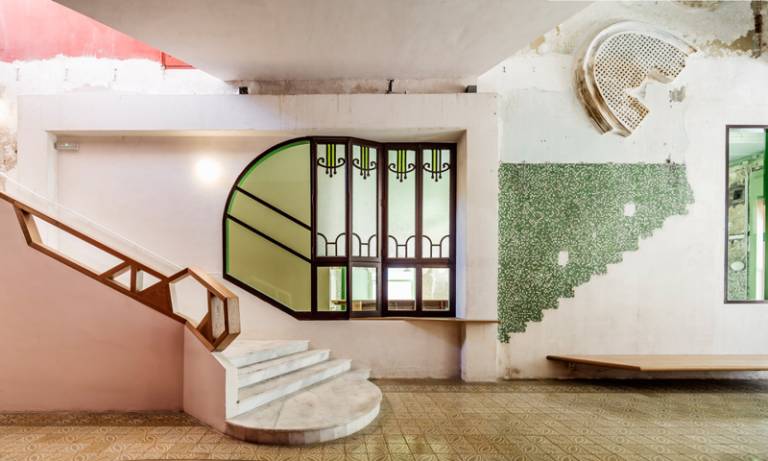 35 Doors and 19 Windows for the new Sala Beckett

The lecture will focus on the process of designing and building the Sala Beckett Theatre in Barcelona, the most recent work by the Flores & Prats architecture studio.

The project has been developed in close relationship with the Theatre Director and the existing building.

The way in which the Sala Beckett team and the Flores & Prats studio develop their ideas is by testing them physically. The handicrafts practised by the theatre team are similar to the way the studio develops their ideas: through hand drawings, modelling and conversation. This similarity facilitated the relationship during the design process.

The new building has been designed inside an existing social club from the early 20th century that had been abandoned for more than 30 years. Flores & Prats have worked with the building's many different periods; as a result, visitors today can recognise the old social club and its years of abandonment as well as the new theatre.

Eva Prats graduated from the Barcelona School of Architecture (ETSAB) in 1992. She is currently developing her PhD for the Royal Melbourne Institute of Technology under the title ‘Clients as Mentors’.

After a long collaboration at Miralles & Pinós, Eva established Flores & Prats Architects, together with Ricardo Flores, in Barcelona in 1998. The office has worked on reoccupations of old structures, as well as on citizen participation in the design process of urban public spaces, and on social housing and its capacity to create community.

Flores & Prats was awarded the Grand Award for the Best Work in Architecture by the Royal Academy of Arts in London 2009 and has exhibited at the Biennale di Architettura di Venezia 2012, 2014 and 2016. They have recently been awarded the City of Barcelona Prize 2016 for their new Sala Beckett / International Drama Centre project.

Besides her professional practice, Eva Prats has been a professor at the Barcelona School of Architecture of Barcelona since 2002.