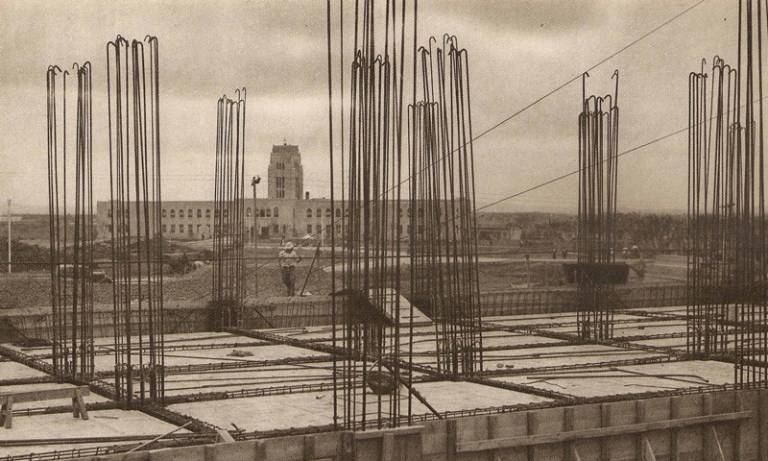 Join Dr Edward Denison, lecturer at The Bartlett School of Architecture, UCL, and Guangyu Ren for a discussion and launch of their latest book, Ultra-Modernism – Architecture and Modernity in Manchuria. The book is not only the first international publication to investigate this important but overlooked architectural history, but is also an attempt to question the very master narrative of architectural historiography that continues to prejudice western experiences over others.

This is a free event.

History is a record of power. The writing of history is a privilege of life’s winners – one which is denied to its losers. The modernist canon bears exceptional testimony to this inequity. Constructed throughout the twentieth century – modernism’s century – it privileged western ideas, methods and territories while suppressing others. For architecture, the consequence is a world constructed in the west’s image and constricted by its gaze. Manchuria – the north-eastern region of China formerly occupied by Japan – epitomises this partiality. In an Anthropocenic epoch in which our knowledge of the built environment and its history is necessarily planetary, this partiality exposes the canon’s deficiency.

Japan was the first non-western nation to fully embrace modernisation and, like many western nations before it, it enlisted empire. Defeating China and Russia, and outmanoeuvring the western powers, Japan’s occupation of Manchuria from 1905–1945 precipitated unprecedented investment in city planning and architecture. So significant was the scale and scope of this encounter, Japan called it Ultra-Modernism – a term deliberately distinguishing it from western precedents.

In 1932, Japan formally created the new state of Manchukuo, but imperial dreams swiftly turned into a nightmare and global conflict. The dropping of atomic bombs on Hiroshima and Nagasaki not only brought an end to Manchukuo, but marked the dawning of an entirely new age – the Anthropocene – in which humankind’s impact on the world became global, including our capacity to not only create entire modern cities, but also to destroy them in an instant. Ultra-Modernism – Architecture and Modernity in Manchuria is an attempt not merely to narrate one overlooked history, but to question the master narrative.