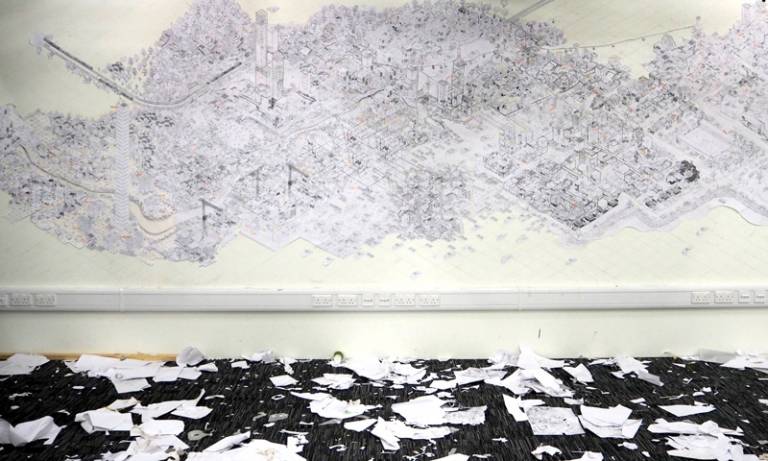 Does citizen engagement make for a better city, or undermine its potential? Can – and should – a city ever be “complete”? Network culture and new technologies have fundamentally transformed our abilities to take decisions collectively, raising the question: who has the right to design the city?

Following the Incomplete City workshop, this lecture will be a performative exploration of the history of cities as a product of their inhabitants’ needs and imagination, tracing the key technologies that over the centuries transformed the relationship between city and citizen. We will revisit the work of thinkers and designers whose work has charted radical alternatives to the top-down visions of the modern city – from Christopher Alexander to Alejandro Aravena and Le Corbusier himself – to speculate on possible futures for the field of urban design.

Joseph Grima is an architect, editor and curator based in Genoa, Italy. He is the founder of Space Caviar, an architecture and research practice operating at the intersection of design, technology, activism and the public realm, and director of the Ideas City programme at the New Museum of Contemporary Art in New York. Together with Dan Hill he is Sir Banister Fletcher visiting professor at the Bartlett School of Urban Design, and is a unit master at the Architectural Association. In 2015 he was co-artistic director of the first Chicago Architecture Biennial, and in 2012 co-curated the Istanbul Design Biennial. He was previously the editor-in-chief of Domus magazine and director of Storefront for Art and Architecture, New York.

Dan Hill is an Associate Director at Arup, and Head of Arup Digital Studio, a multidisciplinary service and strategic design team.

A designer and urbanist, Dan’s previous leadership positions have produced innovative, influential projects and organisations, ranging across built environment (Arup, Future Cities Catapult), education and research (Fabrica), government (SITRA), and media (BBC, Monocle), each one transformed positively via digital technology and a holistic approach to design. He has lived and worked in UK, Australia, Finland and Italy. He started his career working on the urban regeneration of Manchester, and has subsequently worked on city strategy and urban development projects worldwide.

He is a visiting professor at The Bartlett School of Architecture in London and an adjunct professor at RMIT University in Melbourne. His design work has featured in UAE ‘Museum of the Future’, Dubai (2014, 2015), Istanbul Design Biennal (2012), ‘Habitar’ (Gijon, 2010), and ‘Remodelling Architecture’ (Sydney, 2009), as well as being regularly featured in global media. He is the author of ‘Dark Matter & Trojan Horses: A Strategic Design Vocabulary’ (Strelka Press, 2012), as well as numerous pieces for other books, journals, magazines and websites.