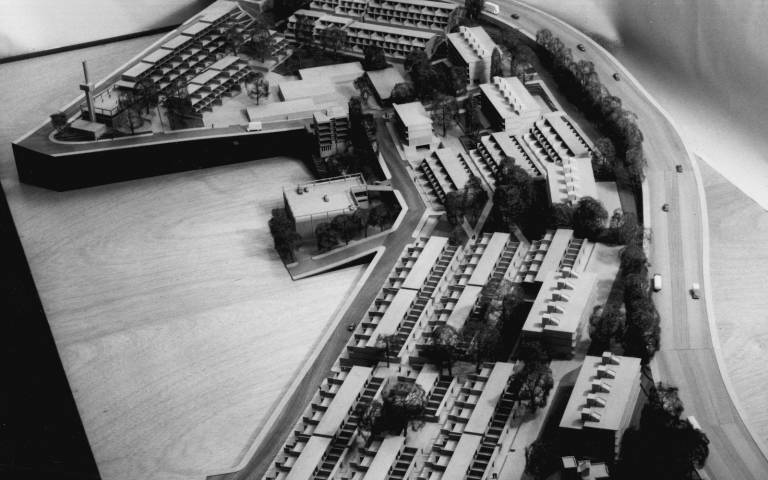 This research will explore council housing by investigating developments designed and constructed between 1965 and 1980 in the London Borough of Lambeth. 1965 to 1980 has been selected because it is the most recent period of extensive public housing construction in the United Kingdom, bookended by the 1965 reorganisation of local government and the beginning of the neo-liberal counter-revolution in the late 1970s. The geographical focus is on London because a search for high density during that period was greatest here. Amongst the inner-London boroughs Lambeth stands out as the largest, most diversely and densely populated borough at that time.

A closer look at Lambeth developments reveals examples of many themes present in contemporary council housing. Lambeth’s housing of the 1960s and 1970s was of extraordinary design variety to meet diverse high-density housing needs. Next to the welfare state-aided high-rise developments, Lambeth developed low-rise high-density schemes that do not look like council estates because they are carefully placed, reflecting and conserving urban grain, and respecting topography and historic character. Lambeth was a model for rehabilitating historic housing and notable for the successful integration of community and welfare buildings. Lambeth’s practice has been described as exemplary for gauging public opinion, using exhibitions and public consultations, anticipating the 1969 Skeffington report, ‘People and Planning’.

The biography of Lambeth’s head of architecture and planning during that period, Edward Hollamby, serves as a storyline through the intellectual context and suggests origins may be found in the Arts and Craft movement.

The project will mix fieldwork, oral history, and archival study. Documents and interviews will shed light on earlier responses to social questions and likely highlight aspects of the history of council housing that have been underplayed in the existing literature, in particular historic instances of community engagement, smaller more contextual schemes, social facilities and the rehabilitation of historic building stock, not only an architectural and environmental priority, but also a matter of social benefit.

Christiane Felber’s grounding is in architectural practice, working in London since graduating at the Swiss Federal Institute of Technology, ETH Zurich, in 2003. Her search for how to most positively impact society whilst working on residential projects and in the context of the current affordable housing shortage in the UK, led her to examine and reflect on historic council housing, disentangling the intellectual context: cultural, political, social and economic factors.

Born in Frankfurt am Main, Germany, she early learnt about the large-scale public housing programme ‘Das Neue Frankfurt’ that created 25,000 homes between 1925 and 1930 which are still loved by inhabitants today. Studying in Zurich, she was exposed to the rich culture of cooperative housing and democratic processes there. Tackling housing in today’s metropolis and contributing to improving living standards is her aim.